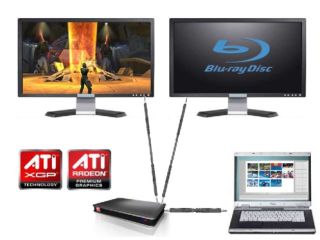 Fancy a notebook PC with powerful, upgradeable graphics? It's not a new idea, but it has proved an extremely difficult concept to realise. Until now. AMD's new XGP (eXternal Graphics Platform) technology, revealed today, is by far the most promising effort yet.

The big difference with XGP is the wholesale removal of the high performance graphics subsystem from inside the notebook PC. Previous attempts to deliver on the upgradeable laptop graphics concept have typically focused on creating a standard format for internal mobile graphics cards.

But given the extreme constraints of the notebook form factor and the proprietary design of each and every model, that has proved impossible. Instead, XGP utilises an entirely self-contained external box to provide the graphics grunt.

Inside the box is a full-sized graphics card which connects via a single cable to a proprietary graphics port on the notebook. In theory, any of AMD's ATI-branded desktop graphics chipsets, including its upcoming high performance RV770 GPU, is compatible with XGP.

A low-power integrated graphics chip remains inside the laptop to cater for battery-powered usage.

If you're wondering how XGP actually works, it's surprisingly straight forward. The connection between the external box and the laptop PC is essentially a conventional PCI Express 2.0 link with eight lanes.

The rendered image data from the external XGP box is transmitted over that PCI Express bus to the frame buffer in the laptop's built-in GPU. The image data is then sent as normal the LCD panel via the LVDS transmitter. It's also possible to directly connect an external display the XPG box itself.

So it's certainly flexible. But will it be affordable? In theory, yes. No additional components within the motherboard chipset are required. Notebook makers need only wire up the XGP port to the PCI Express bus and Bob's your mobile gaming guru. So, it should only add a few dollars to the manufacturing cost.

That said, at launch XGP is restricted to AMD's new mobile PC platform, codenamed Puma. However, AMD says it is theoretically compatible with chipsets, CPUs and GPUs from other vendors.

In other words, there is no technical reason why, for instance, XGP can't be licensed for use with Intel CPUs and NVIDIA graphics technology, for example. As exciting as XGP is based on AMD technology alone, it would be even better as an open standard used by the industry as a whole.

As for the cost of the external box itself, AMD is not currently able to provide guidance. For now, just one notebook maker has decided to have a punt on XGP. Fujitsu Siemens will be offering XGP, branded “GraphicBooster” and based on ATI Radeon HD 3800 graphics. It'll be available on selected Amilo notebooks later this year.

Our only doubt, therefore, involves adoption by notebook makers. Will they really embrace a technology that encourages consumers to hold onto their laptops longer? AMD is hoping the Fujitsu-Siemens Amilo with GraphicBooster is so popular the big boys are left with little choice! So are we...