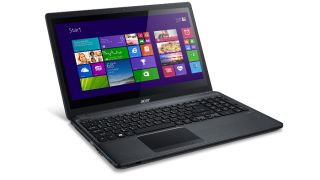 Acer has gone back to the future with its new Haswell-powered Aspire V5 range of ultrabooks by equipping them with an inbuilt optical media drive.

But before you begin to scoff and make jokes about Betamax, MiniDisks and Zip drives, it should be noted that the Aspire V5-561P's drive is M-DISCTM enabled.

Compatible M-DISCs are capable of storing up to 4.78GB of data permanently thanks to containing a layer that doesn't deteriorate when files are copied or transferred, unlike regular rewritable CDs, and their robustness is so that they are used by the US Department of Defense.

It houses up to 16GB of RAM alongside AMD's Radeon R7 or R5 discrete graphics card, and Dolby Digital PlusTM Home Theater surround sound is onboard to help turn your living room into a local M-DISC-oteque.

Connectivity options include HDMI and VGA for hooking up the laptop to external displays, alongside a USB 3.0 port and SD card slot.