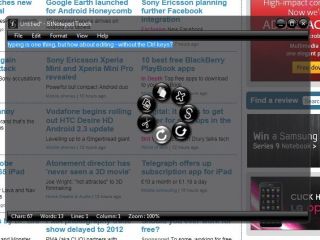 These Windows 7 apps make good use of touch

Tablet and ultra-mobile touch PCs have been around for years but there's still not a lot of software that makes the most of touch.

Windows 7 itself is pretty good with touch; swipe up on taskbar icons for jump lists, turn on flicks in all eight directions for shortcuts like copy and paste as well as navigation, use handwriting to write short sentences and URLs - and remember that Media Center's big buttons work very well with touch.

As Windows tablets reach the market we're expecting to see more apps that really make the most of touch, but there are some apps you'll want to put on your tablet as soon as you get it, because they make good use of touch or because they make touch easier to use.

Here's our pick of the best Windows 7 tablet apps.

OneNote lets you handwrite your notes and draw diagrams (it works best with an active pen but you get good results on a capacitive screen with good touch resolution like the Iconia Tab), record audio that's time-synced to your notes, clip info from web pages and sync to other PCs seamlessly.

If you actually need to get some work done on your tablet, OneNote is the best tool.

There's a lot of amazing pictures on Flickr and the new touch-friendly Flickr app for Windows 7 is a fun way to explore them - and it's nice for showing people your own photos too.

Swipe through recent activity like photos you've commented on, photos from your friends, your photostream and what Flickr thinks is interesting, including photos near where you are if you're looking for inspiration. Everything is designed for swiping and tapping (like the matching Windows Phone 7 app).

ArtRage is the original tablet PC natural painting application; everything from accurate oils and watercolours to stickers and glitter. Use a stylus for fine detail or paint with your fingers using a photo to trace from.

Kindle for PC works best on smaller tablets where what you see on screen looks more like a book (or an ebook reader); books download quickly, open where you were last reading - and you can just flick across the screen to turn the page.

The minimal interface on IE9 isn't just an attempt to look as unobtrusive as Chrome; it also makes IE9 more finger friendly - dialog box settings are awkward but you can do most of what you need from the single Settings menu or the address bar icons and pinch-zoom and finger panning work very well on the vast majority of Web sites.

Opera Mobile 11 for Windows is basic but has smooth pinch-zoom. For far more comprehensive touch controls, check out WCS Touch Browser, which uses the IE browsing engine with simple menus that are just the right size for fingersand handy options like side-by-side browsing.

If you want a screensaver that you can't accidentally unlock by brushing the screen as you carry your tablet, use SlideToUnlock. Not only can you only unlock it by deliberately swiping across the screen but it also showcases your own photos or images from your favourite Flickr user.

Pen Commander lets you finger-write words and shortcuts into a panel to launch applications, open documents, copy and paste, insert text you use a lot or that's hard to write (like URLs) - and write your own scripts to run Ctrl-key combinations using gestures.

WordPad's ribbon interface is OK for touch but if you want to get as fast at editing as you would be using commands like Ctrl-Z and Ctrl-V, check out the floating transparent text editor StNotepad Touch.

Press and hold and the context menu appears in a floating circle with round icons for key commands. Alternatively, learn the gestures - swivelling two fingers on screen clockwise to redo and anticlockwise to undo for example.

Remember the curved corner keyboard on 'Origami' UMPCs? It's still a great way of typing on a tablet you can hold in both hands. With DialKeys you can reach the keys with both thumbs, including function keys, so you can type as fast as on a smartphone and it's really well thought out when you need to type more than basic letters - tap one key for symbols and punctuation, slide either thumb along the edge of the curve for numbers. You can even use it as an app launcher.