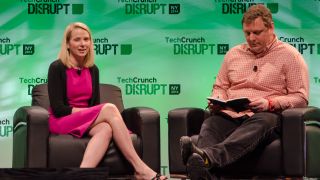 Since Marissa Mayer took the reins as CEO at Yahoo, the company has been cutting the fat and refocusing on mobile aspects of its services.

Mayer took the main stage at the TechCrunch Disrupt conference in New York to directly qualm any murmurs of the company's identity crisis, directly answering the question whether Yahoo was a internet tech company or web media-focused firm.

"Over the years in Silicon Valley [the question has] became Yahoo's version of navel gazing; is it media, tech driven media, media-driven tech?" Mayer related.

"In short, it does not matter," she said. "What matters is we build products that people love, that they use everyday but are beautiful, inspiring and use technology in new ways."

Furthering Yahoo's media empire, Mayer noted that the company will start incorporating video into its specific news verticals, including finance and sports.

On top of that the company has recently announced plans to produce its own original video content a la Netflix. Yahoo's two series include Other Space, a space-borne romantic comedy, and a behind-the-scenes look at the Las Vegas NBA expansion team Sin City Saints.

Yahoo isn't any stranger to video content, but Mayer said it is taking a different tactic by "doing fewer things that we think are bigger and have a better chance of success."

With the verticals, Yahoo plans to shoot smaller or shorter form content support its news coverage. In the past, everything was branded as its own series.

"Literally last year we produced 86 different series," Mayer recounted. "None of them you remember or heard about because it was just a failed branding exercise."

Earlier this year Yahoo surprised us with a News Digest app made specifically for mobile news viewers. Based on today's Disrupt talk, that could just be the tip of the mobile spear.

Mayer shared the story of how she discovered during her first week at Yahoo that the company only had 60 mobile engineers.

"When I got to Yahoo, mobile was everyone's hobby," Mayer quipped. "Everyone did a little bit of [mobile] and it was literally no one's job."

Since then the company has built up its team and now has over 500 people working on mobile.