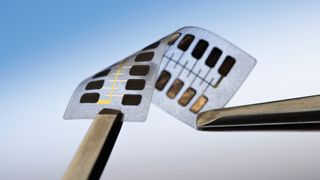 Xerox has debuted a pair of printable memory devices that are geared towards preventing counterfeit products.

First reported by phys.org, the Xerox Printed Memory is an extremely secure label that contains up to 36 bits of rewritable memory and is able to store up to 68 billions points of data to hasten the fight against counterfeit products.

"Our printed memory products provide a cost efficient, highly secure method of authenticating and verifying information about a product as it moves through various distribution channels or as it is used," said Steve Simpson, Xerox vice president responsible for Xerox Printed Memory.

The product line-up is made up of the aforementioned Xerox Printed Memory and the second offering is the same except that it has added Cryptographic Technology to make things even more secure.

Each Xerox Printed Memory with Cryptographic Technology chip is equipped with a unique, encrypted printed code on the memory that can only be read by authorised personnel using a reader that works together with a secure smartphone application.

Use cases identified by Xerox for the new memory include making sure pharmaceutical products are safe, securing tax and duty stamps for government agencies and tracking products along the entire supply chain.

The new feature, which is far harder to copy than other anti-counterfeit methods like watermarking, has been developed by Xerox's PARC company that also unveiled a self-destructive memory chip earlier on this week.

Xerox first licensed the printed memory technology from Thin Film Electronics ASA in December 2014 and the new chips with be produced at a plant in New York.