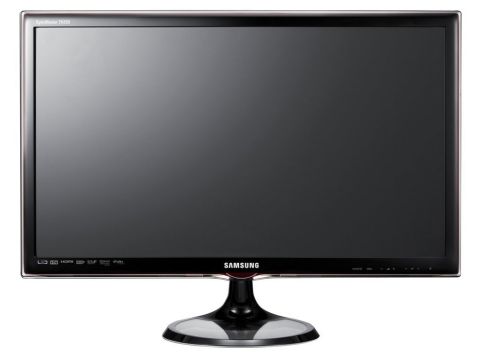 An HD TV and PC monitor in one for a good price, but it lacks some useful features

Movies, games, PCs and TV. Can a single screen really display content for every count? That's the challenge for the new Samsung Series 5 T27A550 HD TV monitor. It's a 27-inch beast with an integrated digital TV tuner and enough inputs to cope with everything from desktop PCs to games consoles and set-top boxes. It's the total video solution.

That it looks a little like a miniature high-end HD TV, sports a full HD 1920 x 1080 pixel grid and comes with an infrared remote just sweetens the deal. It's an awful lot of screen, features and technology for the UK price of £414 or US cost of $430.

Of course, HD TV prices have been tumbling of late. Some 32-inch HD TVs can be had for under £250. Likewise, pretty much an HD TV with an HDMI port is capable of doubling as a monitor for a PC or a screen for a gaming console and set-top box.

It's also worth noting that the panel itself is based on that cheapest of LCD technologies, TN. At this price point, that's inevitable. But it's worth remembering that large, expensive HD TVs use more sophisticated VA or IPS technology.

In that context, the 27-inch Samsung T27A550 Series 5 LED HD TV monitor looks more reasonably priced than outrageously cheap. However, it does have a few extra features that separate it from the norm. For starters, it supports playback of music, video and images from any standard mass storage USB device.

Samsung has also come up with a few technologies intended to offset the image quality issues that come with TN panel technology. Dynamic contrast is an old trick used to compensate for poor black levels. More intriguing is Samsung's Magic Angle Vertical tech, which claims to improve viewing angles, another TN weakness.

Of course, this isn't the only all-in-one screen on offer. The LG DM2350D does all this and more in an even smaller 23-inch package. Samsung itself does a number of cheaper options, including the Samsung B2330 HD.