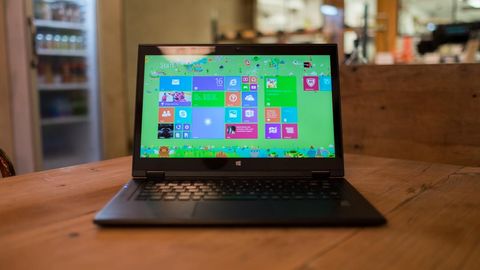 Weighing in at 2.04 pounds, the Lenovo LaVie Z 360 might be the easiest hybrid laptop to sling around – it's too bad that using the notebook is almost an entirely disappointing experience.

In the race to make laptops smaller, thinner and lighter than ever, 2015 has been an exciting year. Dell brought out a stunning machine with the Dell XPS 13, squeezing a 13-inch screen into an 11-inch frame. Apple, on the other hand, sought to reinvent the laptop with a brand new 12-inch MacBook, which squeezed an iPhone 6-sized logic board into its all-aluminum frame while introducing a redesigned keyboard and trackpad.

Now, Lenovo has brought forth its own contender with the Lenovo LaVie Z 360. Weighing in at only 2.04 pounds (0.93 kg), the paper weight on your desk is probably heavier than this 13-inch, 2-in-1 laptop. However, unlike other thin-and-light hybrid machines like the Asus Transformer Book T300 Chi and the firm's own Lenovo Yoga 3 Pro, it hasn't given up ports or performance in the name of portability.

Inside of this 0.67-inch thick machine, you'll find an Intel Core i7 processor plus two USB 3.0 ports and full-size SD card reader. While it's amazing that Lenovo has managed to squeeze so much into such a thin and light frame, the Lenovo LaVie Z has sacrificed too much in the ways of battery life and build quality to get there.

"Is this thing real?" was a question my friends all asked me when I handed them the LaVie Z 360. The laptop truly is so light that you might think you actually bought one of those mock laptops from an Ikea showroom.

It shouldn't really come as a surprise, because the LaVie Z 360 weighs a hair over 2 pounds. This makes the LaVie Z 360 a pound lighter than just about every other 13-inch laptop. The only notebook to weigh less is the new MacBook, which sacrificed everything from full-size USB ports to a traditional keyboard and trackpad to reach its 2.03 pound (0.92 kg) goal.

Now, that light weight comes as both a blessing and curse. On one hand, you'll barely notice this laptop is even in your bag because it is just that light. That said, the laptop feels genuinely hollow, and it creeks easily under pressure – even if you're just holding it with your hand. Worse yet, the entire device feels like it's comprised of flimsy plastic rather than the magnesium-lithium chassis it's actually made of.

The laptop even looks cheap. Lenovo is usually good about making its machines look premium, even if they're meant to be budget devices, with interesting quirks like brushed plastic panels or a minimalistic design.

The LaVie Z 360, on the other hand, appears as if it was glued together. The laptop features plenty of naked panel lines with an especially prominent end cap, which clearly runs across the front lip and loops around the touchpad. If that weren't striking enough, the display appears as if under a thin sheet of plastic. The clear film appears to bend and warp at certain places. With the test unit sent to TechRadar, I could most prominently see and feel dents in two places along the base of the screen.

It's off the mark, compared to the solid build quality I expect from a ThinkPad or even the Flex series, but that can be mostly attributed to the fact that – technically – this isn't a Lenovo device at all. Rather, this is a device manufactured by a Lenovo-partnered Japanese electronics firm named NEC, which Lenovo then went on to market and distribute in the US and elsewhere in the western world.

The plastic screen Lenovo chose to go with doesn't just look bad, it also hampers the underlying quality of the display. Reflections, for one thing, are an absolute nightmare, as the plastic sheen catches every speck of light. If you've watched any of the recent Star Trek films, like lens flare, these small bright spots annoyingly obscure anything you're trying to look at on the display.

The glossy display is a real downgrade from the matte screen seen on the Z 360's non-convertible kin, the Lenovo LaVie Z, which TechRadar's Juan Martinez felt was one of the best he had ever tested. Unfortunately, having a shimmering sheen is an unavoidable pitfall when you add a touchscreen to the equation.

The screen itself is pretty decent but definitely not the best I've seen. While the backlight is more than adequately bright enough to be kept at 50% most of the time, be prepared to see a whole lot of yourself when you take this laptop outside. The display turns into a mirror under sunlight. Colors on this screen are decent, but they have a habit of being too washed out, which unfortunately makes this an unreliable platform for image editing.

Bar none, the worst thing about the multimedia experience on the LaVie Z 360 is that it seems to be outfitted with the tiniest and tinniest-sounding speakers Lenovo could source. It's not an exaggeration to call them the worst speakers I've ever encountered on a laptop. Sound projects as if the device were setup with a mono-only channel that mostly comes pouring out of its right side.

The audio quality is so bad it may as well be on par with trying to listening through the ear speaker on a smartphone. I honestly wouldn't be surprised if the underlying speakers were that small, given that they're crammed into the front lip of the laptop.