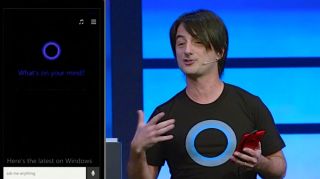 Cortana looks like a halo, as she herself pointed out

Microsoft began its Build 2014 conference with an announcement that we've been expecting for a while: there's a Siri rival built into Windows Phone 8.1, and its name is Cortana.

Cortana is also the name of the artificial intelligence character in the Halo video game series, of course, and Microsoft is taking full advantage of that fact.

Corporate Vice President of Operating Systems Group Joe Belfiore introduced the virtual personal assistant, asking her whether she likes her name and her appearance, to which the circular "AI" replied that she resembles, among other things, "a halo." Good one, Microsoft.

Cortana gets her own live tile in Windows Phone 8.1., but that's only one way to access her - she also replaces the search function in the mobile OS.

Users interact with Cortana with natural voice commands and requests, Belfiore demonstrated. You can also type complex requests directly to her.

"Like a real personal assistant, she's good at handling your communications and your calendar," he said. "She's also good at helping you learn things."

He asked her about calendar entries and added items to his to-do list, and she informed him about a conflict in his calendar. Cortana even asks your permission to read your email, Belfiore said - unlike the NSA.

More importantly, Cortana can also be "extended" by third-party apps - unlike Siri. Belfiore asked Cortana about Mexican restaurants, to which she replied using data from Yelp.

She also added a show to Belfiore's queue in the Windows Phone Hulu app, and launched Facebook when he asked "what's up with" a friend of his.

He also showed off "people reminders," by which the virtual assistant can identify certain people and perform contextual functions. For example Belfiore asked her to remind him of something whenever he talks to "my sister," and said Cortana would then pipe up if he texted, emailed, called, or otherwise interacted with the person she identifies as his sister.

Belfiore revealed that Cortana will launch as a beta.

There were a few hiccups during the demo, when she misinterpreted or misheard some of Belfiore's commands. So maybe she's not all that different from Siri after all.

"From our point of view Cortana is the first truly personal virtual assistant," Belfiore said.

Windows Phone 8.1, including Cortana, will start rolling out to existing phones "in the next few months," Belfiore said. Meanwhile the update will arrive on new smartphones in "very late April or early May."

Cortana may be launching in beta, but Microsoft plans to unleash the full version in the US, the U.K. and China in the second half of 2014, with other countries to follow moving into 2015, Microsoft later shared in a blog post.