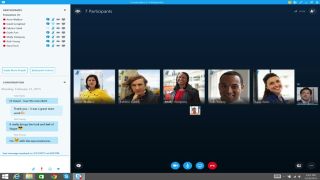 Hot on the heels of the Skype for Business technical preview, Microsoft has posted a new blog and video that reveals where it sees the platform will go in the future.

The video lays out Microsoft's vision for Skype for Business's future where it will quite literally be at your fingertips wherever you are. Running late for work? You will be able to plug into a conference call via your smartwatch. The video also also revealed that Skype Translator will play a role in Skype for Business.

It goes on to show what looks like the 84-inch Surface Hub being used for an annotated two-way meeting between a researcher out in the field, a group in an meeting room and a participant using a smartwatch.

An accompanying blog post from Zig Serafin, corporate VP of the Skype for Business team, mapped out the team's investments in more detail for the coming 12 months and there are three main features he detailed.

Secondly it is implementing enterprise PSTN (public switched telephone network) connectivity from within Office 365, which begins in the US this summer before rolling out globally soon afterwards.

The final new feature is a range of meetings devices that have been specifically designed to be used in conjunction with Skype for Business. Created in conjunction with Crestron, Polycom and SmartSkype Rooms Systems brings the teleconferencing experience to over 50 million meeting spaces worldwide and the devices will be built on Windows 10-based platform.

How to get the technical preview

One of the first planned devices is the Polycom RoundTable 100 designed for small and medium sized businesses (SMBs) and teams to experience Skype for Business inside small meeting spaces with an expected price tag of $1,000 (around £673, or AU$1,309). Microsoft also confirmed that Lync Rooms Systems devices will be compatible with Skype for Business.

These new features will start trickling out once Skype for Business is fully operational next month. For now, you can download the technical preview from the TechNet Evaluation Center to get an early peek at some of the features.