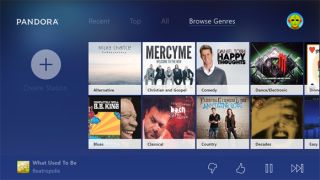 Pandora has never before released an app for a video game console, but it just launched on Xbox One.

Microsoft isn't touting this fact in its Xbox Wire post describing the new Pandora app and a slew of others arriving on Xbox One, but it's true nonetheless.

The free Xbox One Pandora app lets users create personalized stations based on specific artists, songs, genres, or composers, and it's available now in the US.

But that's only one of the new apps now arriving on the console.

The Xbox One is also getting a Vevo app in more than a dozen countries, Popcornflix in the US and Canada, and Bravo Now and Telemundo Now in the US.

None of those are quite as exciting as the HBO Go app that dropped in November, but who's complaining?

"From the beginning, our vision for Xbox One has included offering gamers the ability to play the best games and seamlessly switch to the apps, movies and TV shows they love," the Xbox post reads. "As the year comes to a close, we're excited to continue that vision."