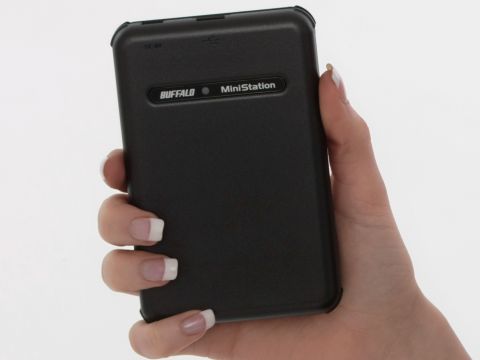 The new Buffalo MiniStation is available in 400GB and 500GB capacities

This is a fantastic product - possibly the best portable hard drive on the market. However, the price will be enough to put off all but the most needy of computer-users.

Thirteen years ago, new PCs came with bulky, heavy 500MB hard drives inside. They were state of the art, and you could install the likes of Doom II and Duke Nukem 3D many times over.

In 2008, things have moved on substantially. And we are now faced with a portable, external 2.5-inch hard drive from Buffalo, which has a capacity of half a terabyte. That’s 500GB, 1000 times more than the internal drives of 13 years past.

The £207 Buffalo HD-PS500U2 is actually the first 500GB portable hard drive on the market, making it somewhat of a desirable storage gizmo for those people who like to take their data wherever they go.

In the box you get the drive itself, which is small enough to fit in a jacket pocket or a ladies handbag. As well as a manual, installation CD and two USB cables – one for power and one for data transfer.

The HD-PS500U2 uses Buffalo’s patented Turbo USB plug-in which the company claims makes transfer speeds up to 20 per cent faster. The box claims that the drive can read and write at speeds of up to 25.2MB/s. However, on our powerful test machine we were able to read and write to and from the device at 38.7MB/s, which is fairly impressive.

But despite the fantastic capacity and the satisfying transfer speeds, things didn’t actually start off very well.

To test speeds, we used files ranging from small 50KB word documents up to large 10GB HD movie files. But out of the box, the drive gave an error message when we tried to transfer the larger files. The problem was that, like most external storage products these days, it was formatted using the FAT32 filing system, instead of the superior NTFS. Most external drives are formatted like this to make them fully compatible with Macs as well as PCs.

A quick re-format later, and NTFS was applied to the device, and we were soon copying across those large HD video files. It was an inconvenience, but shouldn’t trouble most people too much as long as they have a basic understanding of how to format a storage drive.

That speed of 38MB/s was a great relief, given the sheer amount of data we were attempting to copy. Imagine trying to copy over 500GB of data if transfer speeds were as slow as a no-legged dog trying to swim through a gloopy sheep dip. It would be painful.

We managed to transfer 40GB worth of HD movie footage onto the device in less than 17 minutes, which is pretty speedy for a USB device.

This is a fantastic product - possibly the best portable hard drive on the market. However, the price will be enough to put off all but the most needy of computer-users. After all, £207 is a lot of money.