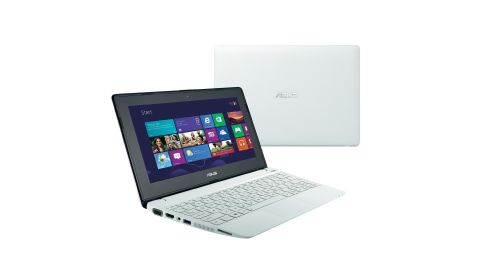 If you're a student on a tight budget, then the Asus X102BA is definitely a good buy. For the money you get a laptop running a full version of Windows 8, meaning you can install almost anything you like on it, which is perfect for students, and the touchscreen makes it easier to use day-to-day. Its light weight also makes it easy to sling in a bag and take on your travels. It really is a useable alternative to a tablet machine like a Google Nexus 10 or an iPad Air.

As is the case with the TouchSmart, those planning to use it every day in a professional work scenario might want to consider something a little meatier in the processor department – something like the Microsoft Surface Pro 2 or Lenovo Yoga 2 Pro might be a better option, though you'll need to pay a lot extra for the privilege.

Though the X102BA looks and feels a little chunky, it's actually one of the lightest laptops we've come across to date, which gives it excellent portability credentials, and its battery life is respectable enough to last you much of the day too. We also liked that the charger isn't too big, so you can always carry battery backup with you.

The touchscreen is an excellent example of how including one doesn't necessarily mean ramping up the price tag on a machine, and the 10-point touch capability means you can happily swipe and pinch all day long without feeling cheated.

Windows 8 might accommodate touch actions well, but not everyone gets on with it. Thankfully Asus has factored this in, and the laptop makes for easy typing no matter how many emails you need to write.

Finally, there's the price tag with the X102BA - it really makes for a cheap entry point into Windows 8. You'll not find many cheaper than this, especially those with such decent all-round abilities.

It was disappointing to see that the newer, more energy efficient processor found in the X102BA wasn't actually capable of turning in a performance that bettered its older AMD A4 peers. The battery life isn't bad, by any means, but it certainly doesn't wow us.

Processing power definitely felt better than that of the older A4 processor, but graphical performance seems to have fallen as a consequence, so do not consider this machine if you're planning to do any kind of gaming, though you'll be just about fine running 720p HD content.

At this price point, the Asus X102BA is surprisingly good. We fully expected a similar performance to that of its closest rival, the HP Pavilion TouchSmart 11, but it betters it in almost every respect – its in-Windows performance is better, the screen is superior and it's much lighter too.

It's not the ideal option for business users, but for students or young kids this is almost the perfect device, thanks to its ability to function as both tablet and useable laptop when needed.

Your only dilemma now, thanks to competition from Acer, is whether you buy this or go for the almost identical offering – both in spec and price - in the form of the V5-123.