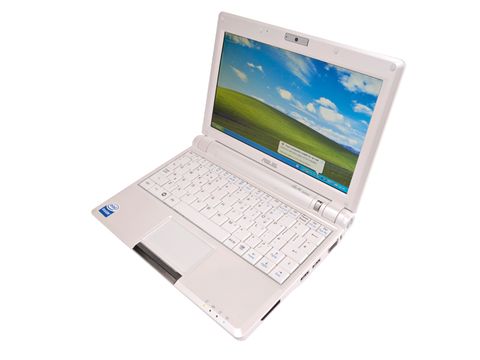 Rare is it that a manufacturer single-handedly creates a brand new market. Rarer still that manufacturer seemingly doesn't realise what it's released on the world.

As Asus was releasing the original Eee 701 the marketing machine hardly matched the commotion that followed as every rival manufacturer began falling over themselves to get their own low-cost, ultra-portable out of the factory door.

By getting its product into the shops first Asus had an easy time of it in the beginning despite the unit shortages caused by the unexpected demand.

With the imminent threat hanging over it of a raft of matching products following the launch of Intel's new, low-powered Atom chip it tried to get a few more stop-gap revisions out. The Windows-based 701 came out just after CeBIT in March with the 900 following close after.

That larger 9-inch machine was originally supposed to be sporting Intel's new chip, but due to delays in the processor's launch Asus decided to ship it with the Celeron chip that powered the 7-inch Eees.

As frenzied as the reception for the first Eee was, the reaction to the larger model was positively tepid. The larger screen was gorgeous, but the multi-touch touchpad was unresponsive, the battery life poor and the price too high. Now the 901 is here, with a larger chassis again and Intel's new wunder-chip doing the do inside. Does it address the problems from the 900, or is it just as guilty?

Thankfully the answer is a positive one. This latest Eee doesn't feel like the stop-gap measure the original 900 did, like a necessary launch for marketing purposes rather than to bring a significantly improved version to market.

Part of this could be the psychological effect of simply having a new chassis, but this new chassis gives it a far more professional feel, as opposed to the slightly Fisher-Price stylings of the 'my-first-laptop'-alike Eee 701.

It is larger though, and definitely chunkier, but Asus has managed to keep the weight down to something close to the original's and is still comfortably held in the hand.

It hasn't gone for the brushed aluminium showiness of HP's pricier Mini-note, going for a glossy finish; it does however have a similarly curved look about it like the Wind. The 901 retains the impressive 1024x600 screen, but unfortunately also keeps the laggy touchpad too.

Asus has made the strange decision to add a brushed effect to the pad's surface too, which gives a slight resistance to vertical movement. It's not debilitating, but definitely noticeable.

What has changed though is the pricing; at launch it's cheaper than the 900 was when it first hit these shores. Only by around £20-£30, but still it makes a difference when you're suddenly having to compete where before there was little or no competition.

The chassis and 1.6GHz Atom aside there are relatively few changes from the 900 as a whole. There is now Bluetooth enabled on the Eee 901, but the inclusion of a six-cell battery as standard is the real stand out feature further down the list.

It doesn't quite give the promised six hour battery life during standard usage tests, maybe on the power saving setting and untouched by man nor woman, but not when surfing the web or watching video for any length of time.
Still, we managed around four hours which for a £330 ultra-portable is not bad, especially considering the first batches of MSI's Wind will ship with only a 3-cell battery.

Asus is also battling on the storage front too. The 901 is sticking with the 12GB/20GB split with its Linux and XP versions, but is also shipping them with 20GB of online space via YoStore.

Granted this isn't going to work for streaming multimedia files, but so long as you've got the wireless link up and running storing documents or pictures in the ether is simple. The YoStore folder appears in your file manager and is as easy as that.

The 901 then is a definite improvement over the stop-gap Eee900, but due to the now bloated marketplace it's hard to get quite as excited as with the original seven-inch version. Still, it's a fine machine and comes out cheaper, and with a longer life, than the current shipment of Winds.

It's also probably at the sweet-spot of the ultra-portable form factor, any larger and you're straying dangerously close to standard laptop territory. The 10-inch Eee 1000 ought to be careful.