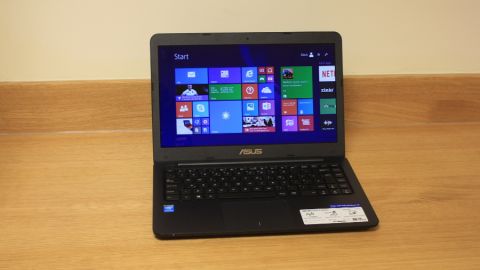 This is a solid enough machine with an undeniably attractive price tag, but the display is disappointing and the lack of free storage space could be a real issue for some.

There was once a time when nothing but netbooks consumed the sub-£200 ($300/AUS$411) price bracket, but fortunately Microsoft and its partners have recently done a lot to drive down the price of larger, considerably more usable laptops.

With the advent of true cloud applications such as Office 365, and a variety of streaming services that have quickly overtaken locally-stored media, lean machines such as the Asus E402MA are making ground at the budget end of the market alongside similar notebooks like the smaller Acer Aspire One Cloudbook 11.

Packing a 14.6-inch screen, the E402MA has a relatively modest set of specifications: a quad-core Intel N3540 M processor clocked at up to 2.66GHz is paired with merely 2GB of RAM and a rather paltry 32GB of storage.

Of course, it was never intended for users to rely on the local storage, as out of the box it is already largely consumed by Windows – users will need to take full advantage of online applications in order to make the most of this cheap-as-chips machine.

Fortunately, a one-year subscription of Office 365 and 5GB of Asus WebStorage are included, which will set most casual users on a path of computing that relies predominantly on the cloud.

If you would rather not rely on cloud services, models with either 500GB, 750GB or 1TB hard drives are available. The 64-bit variant of Windows 8.1 offers a full desktop environment alongside Microsoft's app ecosystem, and (like other current laptops) a free upgrade to Windows 10 is available – should you decide to make the jump.

Considering that the Asus E402MA was designed to a strict budget, it would be harsh to call it an ugly machine, but simply put this particular laptop is distinctly lacking in any notable stylistic details.

The lid and keyboard surround are made from a smooth plastic that is available in a range of colours (blue, red and white), though the chosen material is a horrendous fingerprint magnet. The underside and screen bezel on the E402MA are made from an equally indistinct matte plastic, but at least it does not attract greasy marks quite so easily.

The 1368 x 768 pixel-resolution display is covered in a reflective coating, which helps the screen appear more vibrant indoors, but makes it almost unusable in bright sunlight. Above the screen you'll notice a low-resolution webcam that is only suitable for an occasional Skype or similar video calling applications.

Fortunately where connectivity is concerned, Asus hasn't skimped on the variety of ports available. Both VGA and HDMI are on offer to allow for easy video output, whilst a 3.5mm combined headphone/microphone provides both audio input and output. Data access is provided by one USB 3.0 port on the left side, and another USB 2.0 port on the right; I was happy to see an RJ45 network connector and SD memory card slot included, too.

The trackpad and keyboard are far from the worst I have used on a laptop – including more expensive models. The chiclet-style keyboard feels surprisingly responsive and not too spongy, whilst the trackpad is large, comfortable and also supports a variety of multi-touch gestures – absolutely necessary for using Windows 8.1 (though this doesn't quite make up for the lack of touchscreen).