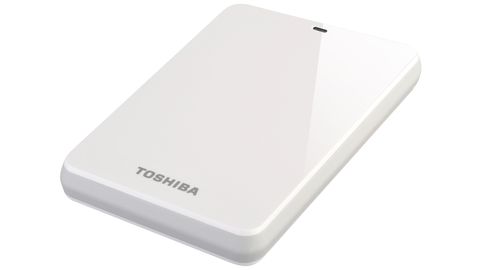 The Toshiba Stor.E Canvio 1.5TB is fast and portable

The new Toshiba Stor.E Canvio brings 500GB to 1.5TB of storage space in a rather compact and attractive case, along with some nice additional software features such as automatic backup software, remote access and 10GB of cloud storage. It certainly looks the part and feels solidly built.

All the software comes included on the hard drive (as well as a Mac driver, which is no surprise considering the drive's white aesthetics). The no frills but perfectly usable NTI Backup Now EZ software covers the backing up process, while Pogoplug PC enables you to access your Toshiba Store.E Canvio over the internet. It's a nice inclusion, though for it to work you need to keep the Toshiba Store.E Canvio plugged into a PC, with the PC turned on - which isn't the most energy efficient way of accessing your files over the internet.

Still, it's handy for sharing files with friends and family, and since the software costs around US$30 on its own, it adds a bit of value to the package. If you plump for the 1.5TB version, however, then the 10GB of additional storage space in the cloud isn't going to seem all that expensive.

Transfer speeds are alright, at 107.95MB/s write and 106.90MB/s read, much faster than USB 2.0 speeds, though not as fast as external hard drives that boast solid state drives. It was ever so slightly faster than the Verbatim GT Portable Hard Drive, which costs around the same price.

Our real-world tests were more impressive, with our 1.36GB test file being transferred over in just 19 seconds.

If you're looking for a solid and dependable external hard drive for keeping your important files safe, with plenty of storage space, an attractive design and a good price tag, then we can heartily recommend the Toshiba Stor.E Canvio.