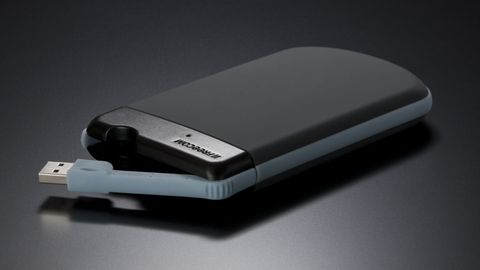 Recommended
Portable, but in need of an extension cable

Portable hard drives are specifically designed to be carted about, but that opens them up to all kinds of dangers, like accidental drops and bumps. Freecom's USB 3.0 Tough Drive is housed in a rubberised silicone cover with an anti-shock mechanism that provides protection against such scrapes.

It also features an integrated USB cable that, along with providing power as well as the necessary means of data transfer, neatly plugs into the top of the case. The end result is a drive that, while not exactly good-looking, does stow away neatly into a small package for transport.

The first issue with the drive immediately presents itself when you unhook the chunky, resilient cable – its length is around the same as the width of the drive, just 8cm. That's not necessarily an issue if you're plugging it into a laptop, but try hooking it up to a desktop and you'll need to provide some kind of extra surface for it to sit on close to the requisite USB port. It would have been nice to have seen an extension cable provided to give you more flexibility in such circumstances.

This gripe aside, there's a lot to like about this unfussy, sturdy drive, not least of which is its performance. Its synthetic benchmarks aren't as fast as desktop drives, but more than a match for other portable drives, with peak read and write times around 115MB/s.

In real-world tests, it performs more competitively with its desktop cousins, transferring 60,000 files (around 36.5GB in total) in under 24 minutes, and copying seven large files (totalling 54.8GB) in under 17 minutes, which compares well with desktop as well as portable drives.

In terms of added extras, the drive comes with plenty of useful software. PC users gain Nero Backup Express, while the drive is compatible with Time Machine on the Mac. Both platforms also get energy management, file-wiping and password-protection software too.

The box also claims support for USB recording and playback, which is a little disingenuous as all USB drives support this. Besides, the length of the Tough Drive's cable makes USB recording a little impractical.

This is clearly a drive for those who have clumsy fingers. Its rubberised design helps with grip as well as providing protection against shocks, and means it can be stowed away less carefully than other drives. Yet despite this extra protection it remains relatively light and easily stows away in your back pocket. Performance is also impressive considering this is a portable, self-powered model.

While the cable tucks neatly into the back of the drive, it's far too short to make the drive as versatile as it should be considering it's a portable drive. Extension cables are widely available, but it would have been nice to have included one in the box, especially given the premium being charged.

A good choice if your butter fingers are making you think twice about investing in a portable hard drive for travel purposes, but you'll need an extension cable to make the most of it.