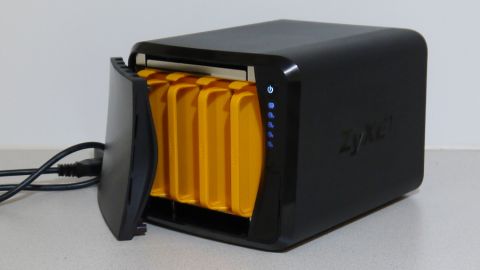 Zyxel makes big claims for its NAS540 but it's very much a work in progress, with tweaks to the operating system required to capitalise on what the hardware is capable of delivering.

Marketed as a four-bay personal cloud appliance, the NAS540 is Zyxel's offering in the tricky crossover market covering both demanding consumers and price-sensitive small businesses. The leading NAS vendors all want a share of this action which means stiff competition for the NAS540 which, although well specified, falls short in a couple of key areas.

A compact and affordable desktop storage appliance, the NAS540 sells for around £180 ex VAT without disks (around $270, AU$350) and is little bigger than the four 3.5 or 2.5-inch drives it's built to hold. It also looks very smart thanks to a curved cube design with a removable access panel over the storage held on by magnets.

Take this panel off and underneath are four bright orange plastic caddies with snap-in fixings to allow standard 3.5-inch SATA disks to be secured without the need for screws. Opt for 2.5-inch disks, however, and you'll need to get the screwdriver out.

The rest of the layout is clean and uncluttered with a power button at the front, next to the drive bays, and a set of status LEDs underneath. Beneath these is a small plastic panel which, when pulled back, reveals a USB 3.0 port and an SD slot, the idea being to use these to copy files onto NAS storage from USB memory sticks, digital cameras and other devices.

Power, meanwhile, is fed in from an external AC adapter that plugs in at the back, which is also where you find the large diameter fan for cooling, which more than lived up to claims of "whisper quietness" during our tests.

The main interfaces are also at the back where you'll find a couple more USB 3.0 ports for backup to external disks, with two Gigabit ports for network attachment alongside. Support for link aggregation is also built in which means that, in theory, the two network ports can be joined together to provide double the bandwidth (2Gbps) while still using just one IP address.

However, for that to work a compatible network switch with support for the 802.3ad Link Aggregation Protocol (LAP) is required, which may be okay for the small business, but not something the average consumer is likely to have, or necessarily want to buy.

Tucked away inside the casing, the NAS540 features a dual-core Freescale FS1024 processor running at 1.2GHz plus a fixed 1GB of DDR3 RAM. This is a reasonable combination and very much in line with what you get from other vendors in this price bracket.

Zyxel also follows the crowd in terms of installation, which can be kicked off from the internet or by downloading a Zyxel NAS Starter utility to run on a local PC. You then connect to the NAS540 from a browser to configure the various options which, unfortunately, is where the cracks start to appear.

In the past Zyxel has employed a simple menu-driven GUI to manage its products, but has now decided to make the move to a more graphical desktop, much like that found on rival Synology and QNAP products. Unfortunately it has only got as far as creating the front-end and porting a couple of diagnostics. So, click on any of the configuration tools and you're transported back to the old interface in a separate browser tab, which is a far from satisfactory arrangement and more than a little confusing.

On the plus side there's a lot of functionality in the Zyxel OS including RAID 6 to protect against a double drive failure. You also get the ability to access the NAS via a private cloud as well as integration with public cloud services such as Dropbox and Google Drive.

These options are all relatively easy to configure but we would have liked a bit more documentation to help new users understand what they can do with the NAS540 and how to go about it.

The six hours it took to initialise a RAID 5 array ready for our tests was another concern, with no flexible RAID option, like Synology Hybrid RAID, on the Zyxel box. Performance was also a little down compared to rival appliances we've tested, even with link aggregation applied, and there is no facility to encrypt data held by the NAS540 at present.