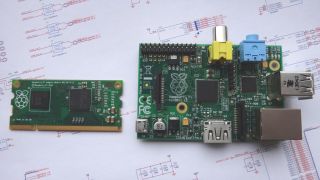 Raspberry Pi has classically been made for tinkers and makers of DIY electronics, but now the computer-on-a-stick slinger is coming out with a unit specifically for businesses and industrial users.

As such it comes equipped with a low-powered Broadcom BCM2835 processor and integrated GPU. Additionally there's 512MB of RAM as well as a 4GB eMMC Flash device for storage.

All the components come attached to a printed circuit board no larger than a laptop memory module, which also plugs into a DDR2 SODIMM RAM connector.

But while it might look very similar to a laptop module, it's actually meant to plug into the computer boards of industrial products, consumer electronics and sensor devices. The Raspberry Pi Foundation's engineering team said the Compute Module is primarily designed for those who want to create their own PCB.

The Compute Module comes with a bootable copy of Raspbian, a variant of the Debian Linux distribution optimized for the Raspberry Pi hardware, baked in.

However, for users who want to dive a little deeper into its programming, the foundation is also coming out with a Compute Module IO Board. The larger module is a breakout board that users can plug the Compute Module into.

Once slotted in, the IO board provides enough juice to power on the Compute Module and grants users the ability to reprogram its flash memory or throw on a completely different OS.

The Compute Module IO Board also features a number of USB and HDMI connectors for connecting the Pi device with external monitors and other electronics.

These kits will be available for order directly from the Raspberry Pi Foundation and the hacker shop, Element 14, for $30 (about £18, AU$32) in batches of 100. There are also plans to sell units in smaller, individual volumes "but the price will be slightly higher," the foundation wrote in its blog post.