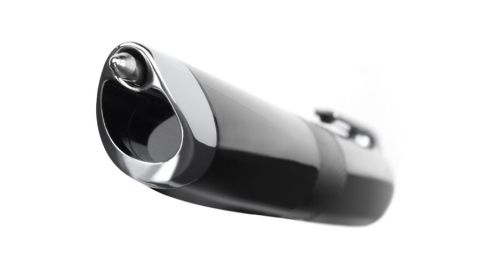 Three is the magic number

The Livescribe 3 Smartpen is the latest electronic pen from California-based Livescribe. Designed to take the pain out of digitizing, archiving and sharing handwritten notes and sound recordings, its wide-ranging appeal spans anyone from note-taking business people to list-scribbling shoppers.

As with Livescribe's previous smartens, the latest model will only digitise your written notes when used with the company's proprietary dotted paper, which is supplied in a spiral-bound notebook. That's because the pen (somewhat disappointingly) doesn't work by magic - it houses a tiny infrared camera in the tip that reads the dots to help it track its position and digitize your pen strokes.

The company hasn't yet managed to engineer its smartpens for use with normal paper, but you can print Livescribe's special variety if you own a 600dpi (or higher) inkjet printer.

There are two versions of the Livescribe 3 Smartpen: a £130 (US$150/AUS$234) version that comes with a LiveScribe Starter Notebook containing 50 sheets and a single Tungsten-Carbide Ballpoint ink cartridge, or a 'Pro' version that comes with a 100-sheet notebook, two ink cartridges and a one-year Evernote Premium subscription for £170 (US$200/AUS$307).

Instead of notes being transferred through a micro-USB cable or via the cloud, as with the company's Echo and Wi-Fi smartpens that came before it, the Livescribe 3 Smartpen beams them to iOS devices via Bluetooth.

That's right: you'll need an iPhone 4S or later, iPad 3 or later, iPad mini and iPad mini 2 with Retina, or iPod touch 5th generation or later running iOS 7 to download the required Livescribe+ app, making it something of an exclusive pen party this time around. Livescribe tells us that an Android version is in the works and will see the light of day "late this year".

The Livescribe 3 Smartpen is thicker than a normal pen and takes some getting used to after using thinner regular types. If you have particularly small hands, you might find that its chunk is a little too much for it to be comfortably held for long sessions.

However, it's not a great deal heavier than a normal pen, and despite feeling very plastic its wide waistline lends it a solid feel that makes you confident it would survive a knock or two. You could sling it into a bag along with an iDevice without being too concerned of its welfare.

Clad in matte black plastic with a chrome tip and belt clip, its design is quietly classy, not unlike a technologically advanced version of something you might be sent after signing up for an over 50s life insurance plan.

At one end of the pen is a ballpoint nib that writes on paper the same as any other pen when the device is switched off; at the other is a capacitive rubber cap that comes off to reveal a micro-USB charging port. Be warned: that cap is on a constant bid for freedom, and you will lose it if you're not careful.

The pen uses real ink cartridges, but only Livescribe-branded ones (67mm length and 2.35 diameter) - or similar carbon-free ink ones that meet the same size and specifications. That means that reusing old cartridges designed to be used with the company's Pulse, Echo and Sky pens is a no-go.

Unlike previous versions, it no longer features an LCD screen or power button, making it feel more like an actual ballpoint pen than a gadget that behaves as one. There's no microphone in the latest model either as audio notes are now recorded using your iDevice's microphone.

Even with the upgrades, it should be remembered that you're ultimately paying a hefty chunk of your hard earned for 21st-Century notepad and pen. Does its bells and whistles make it worth the price of entry? Continue reading our Livescribe 3 Smartpen review to find out.

Next Page Usage and performance