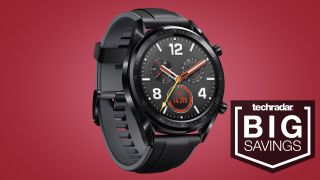 Update: The Huawei Watch GT is still discounted on Amazon, but it's no longer as low as £99.99. You can find the latest live deal below.

Amazon has discounted the original Huawei Watch GT to just over half price for its early Black Friday deals allowing you to pick up the watch for only £109.99.

Earlier this week the watch was available for £99.99, but the price has now increased again. We may see it drop to this lower price again over Black Friday, but there's no guarantees retailers will reignite that deal.

It originally launched at £199.99, and while it has been cheaper in the past year than that, we haven't seen the price sink below the £120 mark in that time.

The Huawei Watch GT features the company's own software allowing for a long battery life that can even sometimes last up to two whole weeks from a single charge.

The functionality here isn't the same as what you'd get on a Fitbit smartwatch or an Apple Watch, but it comes with a variety of fitness tracking modes as well as limited notifications and it has a beautiful design too.

Huawei Watch GT: £109.99 at Amazon
After a smartwatch that can last up to two weeks from a single charge and track a variety of fitness stats? The Huawei Watch GT may be perfect for you, and for Black Friday the price has dropped to near on half what you'd normally expect.View Deal

Not in the UK? Below you'll find the best prices we've found for the Huawei Watch GT.