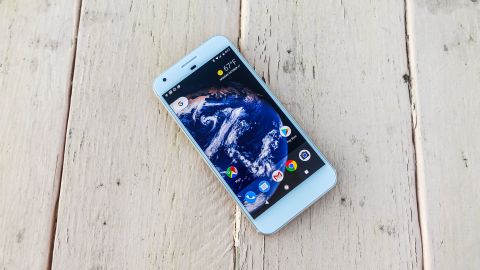 Google has packed a big 3,450mAh  battery into the Pixel XL – and that was a good decision, because the bright and pixel-dense 2K resolution can really drain the phone if you’re not careful.

We found that we were averaging a day and a quarter of battery life during our week with the phone, using it as we normally do: checking social media every hour, playing games while waiting in line and making that rare phone call.

Screen-on time is what drains the battery the quickest. Watching a 90-minute looped HD video as part of our lab testing wore it down to a pathetic 68% from its 100% starting point.

That’s technically worse than every other 2016 Android phone, which means two things: 1) The screen brightness is enough to burn a hole in the ozone layer and 2) Google’s software, with Doze 2.0 battery-saving background features, is really efficient when we’re not using the phone outside of the lab.

If you're a power user, you’re better off with the Pixel XL than the standard Pixel, which, despite its Full HD screen, only gave us a day before we ran back to the charger. Its smaller 2,770mAh power pack is just that much less.

Of course, you’re way better off with either Pixel phone than with the Samsung Galaxy Note 7, which now has the battery life rating of: explosion.

Watch below to see how the Pixel XL compares to the Google Pixel when streaming video, web browsing and gaming.

Google, like many phone makers these days, includes a fast charger, and there’s good news and bad news here. Its 18W adapter charges the phone in a speedy one hour and 50 minutes – that’s the good news.

The bad news is that the adapter uses a USB-C port to achieve those speeds, meaning you have to lug around the USB-C-to-USB-C cable everywhere. Sounds okay, right?

But wait – if you want to plug your phone into a normal, non-USB-C computer, you’ll also have to carry around the (also included) USB-C-to-USB-A cable. Yes, the MacBook Pro 2016 adds USB-C ports, but it's far from mainstream.

Carrying around the USB-C-to-USB-A cable and a Samsung (or another similar USB-A accepting charger) is an option, but we found that charging the Pixel XL with this cable to be about 25 minutes slower. Yet the Samsung Galaxy S7 Edge, with a slightly bigger battery and the same exact cable and adapter, could charge in about a similar one hour and 53 minutes.

Displaying the battery life levels in the system tray (and when the power is off) and improving the charging interface are two areas in which the Pixel falls behind, even if its battery life is a solid day and a quarter.

Every year we're promised a “the best Nexus camera ever” by Google, and with the Pixel, we got teased with something slightly different and even more promising: the best camera in any smartphone.

Google arrived at this conclusion not just through marketing hype, but thanks to analysis by DxOMark testers, racking up the highest score yet for a phone at 89, higher than the 88 for the Samsung Galaxy S7 Edge.

Sure enough, our own side-by-side camera tests showed that the Pixel XL’s 12.3MP shooter is outstanding, capturing some of the most highly detailed and color-accurate photos we’ve seen on a phone.

Is it really better than the Samsung Galaxy S7 Edge camera? Yes and no. Samsung amps up its photos with more saturated tones in almost every shot, and really cranks up the brightness and deep hues.

That’s awesome for blue skies and green grass, where everything really comes alive against white clouds. The day (and everyone in your photo) looks unnaturally perfect.

The Pixel XL has vivid colors, and low-light performance is almost as good, but where it wins out is when things become too bright for Samsung’s otherwise leading camera.

Catch something that’s already too bright in your photo on the S7 Edge, like beach sand on a sunny day, and the sand can become overblown and it really distorts the scenic beach photo.

The Pixel XL captures more natural tones, and shots may come off as a bit duller in side-by-side match-ups, but it works well enough in almost every scenario. To put it simply: Samsung ups the brightness and contrast, Google stays more consistent.

What worried us at first was the lack of optical image stabilization. Google’s camera bump-less design forgoes OIS in favor of software-optimized electronic image stabilization (EIS). But we didn’t notice a lack of sharpness in photos shot without a tripod, or issues with video smoothness when playing back footage. The lack of OIS is overblown.

We did run into a sun flare anomaly when taking photos outdoors. It happened twice, as you can see in our gallery, giving the photos the J.J. Abrams lens flare look when we really didn't want it.

Where Google could usefully put in some work is in the default camera app. LG and Samsung fill their cameras with more features than you can explore in a week. It’s the full mobile suite.

Google's app doesn’t have quite as many modes – it feels as though it’s just getting by with Slow motion, Panorama, Photosphere and Lens Blur, with options like timer, HDR+, temperature controls and burst photos.

Where's the handy gesture shot mechanic to trigger the timer with a wave or even something as basic as time lapse? And you can forget about manual controls. The default camera app feels empty and will send you scrambling to the Google Play Store within the first 24 hours of owning this phone.

The front-facing camera is a different story, however. We shot some of the best-looking 8MP selfies we've seen on the Pixel XL, which thankfully includes HDR+ on the front, too. There's much less barrel distortion than on the S7 Edge, even if the picture isn’t taken at as wide an angle.

Prev Page What’s it like to use? Next Page Verdict