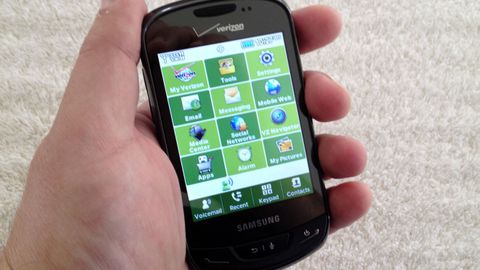 The Samsung Brightside greets users with a lock screen that gives animated cues for unlocking it: The corners curl up in succession, revealing a bit of the home screen underneath. Swiping just about anywhere on the screen (up or down, left to right, etc.) reveals the full home screen with a grid of 12 icons awash in gaudy orange and red (users can change this to green in Settings).

The screen itself is a throwback to a kindler, gentler era – one where only thousands of colors could be displayed at once (262,000, to be exact). The main menu items can be repositioned or even replaced under Settings, including options for customizing wallpaper, themes and sounds.

While there's no denying that the screen is excruciatingly low resolution by modern standards, the icons are finger-friendly and the touchscreen is overall responsive. However, don't expect the Brightside to jump up and do your bidding immediately – the operating system barely keeps up with the unidentified processor, which neither Samsung nor Verizon disclose.

Among the default home screen icons are shortcuts for key features like Messaging, Mobile Web and Email, with dedicated icons for Voicemail, Recent, Keypad and Contacts in an extra row at the bottom. Tasks like Calculator, Calendar and Stopwatch are conveniently tucked away under Tools.

For what's mostly an underwhelming handset, the Brightside does make an admirable effort to offer features found on more illustrious devices. Nuance-powered voice commands are among these, and in our tests it worked pretty well. Commands are limited to 10 different queries, but those cover most everything on a phone like this one.

The Brightside uses a proprietary version of Brew Mobile Platform 1.0.2, which doesn't necessarily try to ape more popular smartphone platforms, but beware: Icons for Media Center and Apps look a whole lot more promising than they actually are.