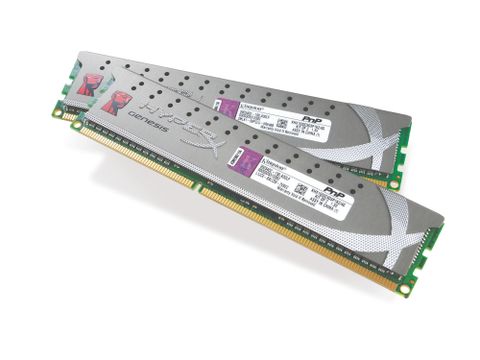 Ready-clocked 4GB RAM is easy for all users

Although you can use many different DDR3 memory speeds in conjunction with Intel's Sandy Bridge technology, from 1066MHz upwards, when it was launched Intel only mentioned 1066/1333MHz support on official specifications.

This was because, at the time, these were the only officially supported speeds from the Joint Electron Devices Engineering Council (JEDEC).

However JEDEC – the organisation that looks after the standards for memory, as well as a great many other things – recently announced official support for both 1600MHz and 1866MHz frequencies.

By programming the SPD of its new HyperX Plug and Play High Performance Memory modules with these new official JEDEC-compliant settings, Kingston's memory automatically runs at the higher speeds in Sandy Bridge motherboards and notebooks.

In the case of the desktop modules this is just 1600MHz, while – quite bizarrely – the laptop user gets the choice of either 1600MHz or 1866MHz modules.   So the 64 million dollar question is, does it work? Well, in a word, yes. We chucked the modules into a P67-equipped motherboard, fired it up and CPU-Z reported the memory running along nicely at 1600MHz without us having to go anywhere near the Bios.

To aid the memory running smoothly, though, without resorting to adjusting settings in the Bios, Kingston has used fairly conservative latency settings (9-9-9-27) with its HyperX Plug and Play High Performance Memory. This conservative memory stance means that, as it stands, these DDR3 modules run slightly slower than the other 1600MHz memory modules we tested it against.

Overclockers and enthusiasts have no qualms about getting their hands dirty in the Bios, adjusting all the memory settings to get the best performance out of a module. That doesn't necessarily mean overclocking it, it just means getting it running as fast as the manufacturer intended.

Kingston's HyperX Plug and Play High Performance Memory modules allow non-overclockers/ enthusiasts to add faster memory to their system without having to worry about using the Bios.

We are puzzled as to why notebook users get a choice between both of the new JEDEC-supported speeds while desktop users have to make do with the slower 1600MHz speed.

The Kingston HyperX Plug and Play High Performance Memory isn't about absolute performance memory prowess, this is about hitting rated speeds without the average PC gamer getting their hands dirty in the confusing world of the Bios. And in that it excels.