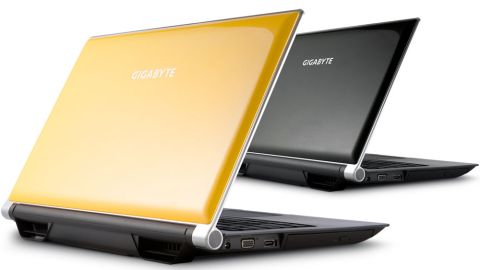 Like the Schenker XMG P503 and P703, the Gigabyte P25 houses Intel's Core i7 4700MQ processor - a Haswell quad-core unit clocked at 2.4GHz that will happily boost up to 3.4GHz, when needed in multi-threaded use.

It's plenty powerful, and because this is fourth-generation technology, the power consumption has dropped from its Ivy Bridge counterpart - meaning battery life will be improved.

The 4700MQ isn't the top of the range - there are several higher-performing processors above it - but it offers excellent performance per pound - anything else would have raised the already-competitive price much higher.

The Nvidia Geforce GTX 770M is also not the top of the range - that accolade going to the GTX780M - but for that privilege, again, you would need to pay a lot more. The equivalent model offered by Schenker would set you back still further. Still, as it is, the 770M delivers the goods, with an 811MHz core and 3GB of GDDR5 memory clocked at 2000MHz.

Equivalent gaming notebooks, like the MSI GS70, make do with a GTX765M, which offers just 2GB of memory.

The 8GB of memory included with the P25 is good, though not uncommon at this level, but the triple-storage solution is certainly worth highlighting. Though the model we tested came with just 128GB of SSD goodness from Liteon, Gigabyte has come up with a rather neat solution to the question of 'What storage should I get?' by allowing you to completely customise your setup.

You can keep it simple with a single SSD and a conventional HDD (up to 1TB). Or you can add two SSDs (up to 512GB each - that's 1TB in total) running in RAID 0, meaning you get two drives doing the work and faster performance.

This is a great idea if you're not sure what you want right now, or you simply can't afford the cost of a second SSD, allowing you to make changes at a later date. The spinning drive option means you have somewhere to deposit your files without having to resort to an external drive to compliment your main unit.

If that's not enough, the P25 also comes with a Blu-ray drive which supports the writing and rewriting of discs, with full-fat BDXL support, which gives you yet another option for backing up your files.

The P25's keyboard features adjustable backlighting for night-time gaming. Unlike other gaming laptops, which go all-out to give you a completely customised setup, such as the MSI GS70, the P25 is a much more subdued affair - good for some, but others may be left wanting.

As is traditional in the world of gaming, the P25 has isolated the W, S, A and D keys to allow gamers immediate access to the controls they need the most.

We found the P25 quite nice to type on, with just the right amount of feedback - slightly spongy and not too shallow a travel. It makes long bouts of tying really easy, with no key mis-presses.

It also has a keypad, which is handy if you're working on spreadsheets very often. The trackpad is nice and spacious, but we occasionally found it to be a little on the sensitive side, and the left and right buttons need to be pressed right on the edge, otherwise they won't register - which can be annoying.

The P25 comes with an array of connections, including 2 USB 3.0 ports, HDMI, SD card reader, D-sub and the handy inclusion of an eSATA/USB combo port. A Kensington lock rounds things off nicely, allowing you the ability to tether the laptop when the time arrises.