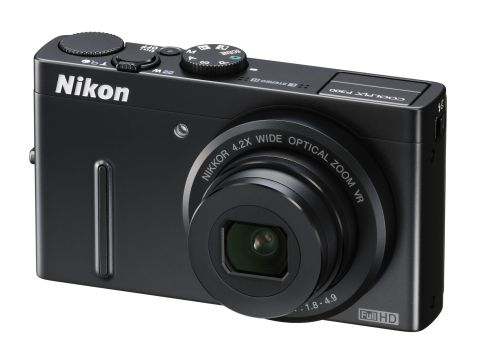 In terms of design, the Nikon P300 fails to spring anything new on us. But considering the range and calibre of technology that has been packed in to ensure a high-performance result, we were happily surprised by its weight at 189g and dimensions of 103 x 58.3 x 32mm, shaving off precious weight and girth to outshine its stockier competitors.

The front panel features a fixed protruding lens barrel, which opens upon activation to erect the 24mm wideangle by an inoffensive length of several centimetres.

On the top plane we find a dedicated mode dial for easy access to the range of shooting modes, including the P/S/A/M exposure modes as well as scene mode selection. The Nikon P300 scene mode offers 16 options, plus five creative filters including: Soft, Nostalgic Sepia, High Contrast Monochrome, High Key and Low key.

Seated next to the zoom control is an independent command dial providing access for adjusting shutter speed, whereas aperture values can be tweaked using the rotary multi-selector that surrounds the OK button on the reverse.

Shooting stills with the Nikon P300 was effortlessly easy and actually enjoyable – operating in a simplistic straightforward manner that even a complete beginner using auto or scene selector mode would be confident with.

One slight niggle arose in that the Macro setting deactivates when the user switches scene mode, filter option or into/out of Auto.

Another problem we discovered is that, while perfecting the exposure using the on-screen aperture and shutter speed guides with two hands was relatively simple, trying to perform this technique one-handed – for example in portrait orientation – was a struggle.

Negating these small qualms, the Nikon P300 actually operates very well and feels very stable and durable in the hand. Macro fans will be delighted at the ability to focus close to subjects at a very satisfactory 3cm.

The camera operated quickly in terms of activation and failed to present an extended shutter lag or write times. The Nikon P300, which accepts SD/SDHC/SDXC memory cards, was able to capture around 220 images in our tests on a full charge – falling just short of the 240 toll suggested by the manufacturer.

The large 3in (7.5cm) LCD presents an admirable 921,000-dot resolution, which for the most part provided us with vivid colour reproduction and sharp contrast, possible thanks to Nikon's Clear Color Display technology that succeeds in reducing power consumption and minimizing reflections.

We discovered that the LCD presented a true reflection of the subject in a range of environments, even in bright sunlight. T

he Nikon P300, as with most Nikon models, comes with ViewNX 2 software, designed as an all-in-one package that enables users to import, browse, edit and share still images and movies.

Loading the images into the ViewNX 2 interface was simple, as the program is extremely intuitive and allowed us to quickly establish that the results presented on the camera's LCD were realistic to those later viewed on-screen.