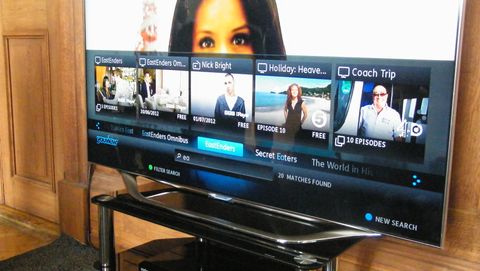 Going back in time on the EPG isn't the only way that you can view on-demand content. Beneath the EPG is a well-designed ticker that's essentially the boxes content's page. Here you can flick from the Guide, to MyView (the shows you have recorded) and On Demand.

We must admit we were disappointed when we clicked into this. This area is where all the apps should be that sets YouView apart from the rest, but all that was in the demo was iPlayer, 4oD, Demand 5 and ITV Player. That was it – on-demand extensions of terrestrial content.

Three years ago and this may well have impressed us but these are the same services we have seen of dozens of other connected devices, nothing new, nothing worth waiting for.

YouView has put a developer call out on its official website, so we are hoping it won't be like this for long, but it's still disheartening to see. And the good news is that Now TV, Sky's PAYG offering will eventually be available on YouView, as will Scottish channel STV.

But there was nothing else here to blow us away. Next to the four on-demand channels are a lot of empty spaces that will surely be filled in years to come but for now the on-demand section leaves us wanting.

And if you are looking for HD on demand then all you have is content from the iPlayer and given that YouView doesn't support adaptive bitrates as of yet - CTO Chris Bramley said that they were looking into adding this at a later date - the HD isn't optimised for those who are blessed with speedy connections.

Until then, if the likes of Lovefilm and Netflix do come aboard, they won't be thrilled that their USP of pushing the best stream out for whatever connection is available isn't actually supported.

Unfortunately there's an even bigger bugbear when it comes to the on-demand content and that is the adverts.

When we watched a programme on 4oD - in our first hands on and not the second, as we weren't shown this functionality in our demo - we found that we had to watch a two-minute advert in full before we could view our content on demand. The ability to fast-forward was frozen when the advert was on, which was frankly annoying. And then we had to sit through the same thing again half-way through the programme.

We understand that advertising funds the programming but a forced two-minute advert wouldn't have been acceptable in 2009, let alone three years later in a world where we can skip YouTube adverts after only a few seconds. And we also understand this isn't the fault of YouView but the content providers, but as user experience it isn't great.

Simplicity may be key to YouView but there are a smattering of innovative features within the service. The search functionality is great – you can pull up the search feature on every screen and find content that way.

Again, though, dig deep and you find problems. With search, it seemed to only check out on-demand content. Anything that was on the real-time TV guide wasn't coming up in our tests - a Humax spokesperson said that they were looking into stretching out the search to non on-demand shows but for now we are stuck with this.

This does make finding content something of an issue through the search bar alone. The better way to do this, we found, was to go through the category search. These are simplified into things like comedy, drama etc… then it gets a little more granular. For example we managed to search for chat shows and talent shows within the 'entertainment' banner.

While this is not a patch on TiVo's all-singing-all-dancing metadata mine, which even allows you to search your favourite actor/actress, for those who want to find decent content it is more than good enough.

You can also filter by AtoZ, Popularity and Latest but you are completely out of luck if you want something recommended. This probably has to do with YouView being an agnostic service, not offering up any one show more than the rest so we can forgive it for now.

Another great feature is the radio section. Again, this seems to rely heavily on on-demand content but it's all packaged perfectly. From comedy shows to the latest tunes, YouView makes searching radio content a breeze and other set-top makers should take note that this is how to do it properly. Radio shows also come up in the all-you-can-eat search bar. And we have been told that this will be a unified search option going forward. So when pay TV content does come on board, this will be just as searchable as the free stuff.

YouView, in its advertising, makes the bold statement that 'it will change the way you watch TV forever'. Either this was a line spun by a copywriter in 2009 and hasn't been updated or the folks behind YouView are blinkered to the fact that TV has already changed forever, and all this box shows so far is that the service is merely playing catch up with catch up.

That said - YouView does offer the most seamless non-subscription experience we have seen yet when it comes to marrying on-demand contet and live TV. If only it launched with more content partners we would be more excited by the proposition but for the moment, and to echo Lord Sugar's own thoughts, it is 'a carcass of a service' that needs a lot more meat before it justifies its £300 price tag.

The YouView UK release date is set for July. Initially it will be a standalone box from Humax but there will be subsidised versions of the service coming soon from both BT and TalkTalk. - of which we will talk more about when we have more time with the service, so stay tuned for our extensive YouView review in the coming weeks.