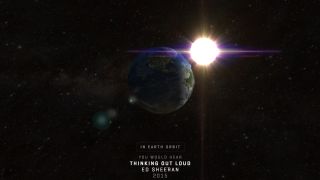 If New Horizons turned on its FM radio at Pluto, what would it hear? Maybe Maroon 5's 'Sugar', according to a website called Lightyear.fm that tracks how far different songs have travelled through space. Poor New Horizons.

Light, as you'll remember from your school physics classes, has a maximum speed - it's about 300 million metres per second - and radio waves travel at the same speed (because they're sort of the same thing). That's fast enough to be basically instantaneous on Earth, but in the vast inky blackness of space it means something.

Depending on how away you are from Earth, you'd hear the music of different days, months and years. Thirty light years from Earth, on planets in orbit around the star Beta Comae Berenices, you'd hear Tears for Fears' "Everybody Wants To Rule The World".

Further out, near the star San 224 about 70 light years away, you'd hear Jimmy Gilmer's "Sugar Shack".

Dear Aliens, have some Meatloaf

Despite New Horizons taking the best part of a decade to arrive at Pluto, radio waves get there in just five hours - so the probe is pretty much just listening to what you were five hours ago. That goes for basically the entire solar system - including the Voyager probes about 17 light-hours away on the edge of interstellar space.

The problem with this exercise, of course, is that by the time any of our radio waves reached these distant places, they'd be so weak that it'd take some serious amplification to make them audible.

But who knows - some incredibly advanced civilisation 22.8 light years from Earth might have figured out the technology to do that, and is marvelling at Meatloaf's "I Would Do Anything For Love (But I Won't Do That)" right as we speak. If they chose to invade as a result, it'd be hard to blame them.