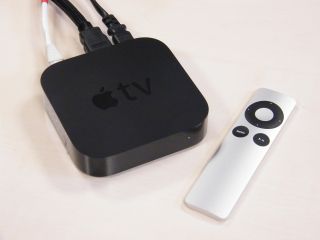 Will we see a new Apple TV unveiled alongside the iPad?

Apple may be preparing to revamp its Apple TV set-top box following reports that another retailer is out of stock and is now refusing orders from customers.

Supplies of the £99 hockey puck have run dry at PC World and the retail park favourite seems unsure they'll be replenished, according to The Verge.

Staff are also being told to say 'no' to customers who wish to place an order for the device, say sources, which is an unusual move for the Dixons Retail-owned company.

PC World is the latest manufacturer, on both sides of the Atlantic to reveal shortages of the current generation Apple TV.

A refresh, which could even be revealed during the likely iPad 3 launch event next month, would surely see Apple embrace 1080p video streaming as the existing device can only muster 720p.

We may also get a redesigned user interface and more new features that could offer clues about Apple's rumoured plans to launch a standalone HD TV set in 2012 or 2013.

We'd also hope to see some new apps and services added to the mix as the set-top box has been a relatively empty vessel since its launch in autumn 2010.