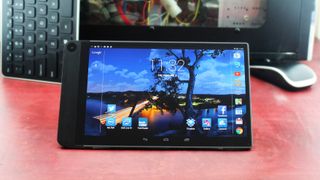 Chromebooks have been a hit with schools in the US according to Neil Hand, VP, Tablet Product Group at Dell but the tide may well be turning as Microsoft encourages its partners to release sub-£200 (about $300) laptops.

"Chromebooks are doing very well in the US because of the centralised decision making inside the education system", he said before adding "that's not the case in the UK and in Europe".

Google's petite laptops have been taking over classrooms and student backpacks as they have, very often, been loaded with features such as enhanced ruggedness that allows them to withstand the sort of rough treatment electronic equipment gets in schools.

Microsoft however has reacted later than expected but recent additions to the line like the Latitude 11 have helped Windows make up lost ground. As it stands, Windows and Chromebooks occupy roughly half of the education market each.

An update on tablets

Neil also revealed that the move was driven by customers with "fuller capabilities offered by Windows" being mentioned as a compelling feature.

Speaking of tablets, he also argued that the hybridisation of Android and Chrome won't help. "There won't be an inflexion point", he quipped.

Bigger screens won't help either as 8-inch screen diagonal appear to be the sweet spot both for businesses and consumers with phablets squeezing out 7-inch models.

The Android tablet market had not only plateaued but also changing in nature; Windows will face fewer, well designed, premium Android tablets like the gorgeous Dell Venue 8 7000 as consumers become more savvy and shy away from cheaper models.

Neil suggests that businesses are being increasingly influenced by what smartphones their employees carry and with Android and Apple making inroads in enterprise segment, Microsoft faces plenty competition.

That said, Google For Work will only transform the tablet into a companion device rather than a replacement one, according to Dell's VP for tablet.

When it comes to form factors, detachable is the way to go for devices with a display diagonal smaller than 11-inch. From 11 to 13-inch, a 360 degree design will likely be the more popular form factor while anything bigger will be a traditional desktop replacement one.

Speaking of that category, Neil said that 15-inch designs are still a pretty big part of the market, as they become thinner and lighter.

"We're bringing back innovation and personality, making sure that there's price in the device", Neil told us. "And those who said that the PC is dead are definitely wrong".