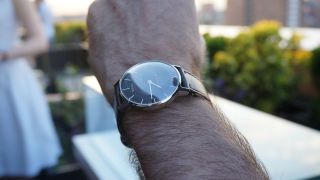 Everyone knows that the wearable scene is heating up. FitBit, Jawbone, Nike and Samsung will all tell you as much. But they've yet to hit mass market like, say, smartphones have. I like to think that, frankly, their appearance is largely to blame.

The functionality and use cases are there, but the majority of smartbands and smartwatches simply look nerdy. That's where the Withings Activité comes in. The company that brought you the first-ever Wi-Fi scale recently unveiled its next stab at the wearables scene.

This is a Bluetooth Low Energy-powered, analog watch with two hand dials, one for the obvious and the other to track your percentage across certain predefined activity goals. Those are set up through Withings's recently-updated HealthMate app for iOS. (No Android support for Activité just yet.)

Those goals include activities (or lack thereof) like steps, swimming distance, sleep and more. And the Activité knows when you're sleep or active through a series of sensors, automatically tracking the correct behavior.

The watch even packs a vibrating alarm function, and is water resistant as deep as 50 meters, or 164 feet. And this is all powered - the sapphire glass touchscreen included - by a standard watch battery with one year of lasting power, Withings claims.

Activité product manager Marie Loubiere promises that this one-year figure is with the Activité remaining in constant communication with your iPhone. (Of course, that doesn't account for your iPhone's battery life.)

Form over function, but in a good way?

The one aspect of the Activité that has sent folks reeling is the price: $390 (about £229, AU$413) when the watch lands this fall globally. When you consider products like recently announced Samsung Gear Live and LG G Watch offer far more functionality for way less, the Activité may be a hard sell.

That said, Withings believes that wearables don't necessarily need to do everything in replace of your smartphone. Loubiere showed off the device to me at the device's launch event in New York and on the CE Week 2014 show floor, though I wasn't allowed to touch.

"That isn't our brand values. We're not Google," Loubiere frankly stated. "We're not interested in creating a product that updates you with constant notifications. We just want to make something that helps you be well."

Considering Withings's history, the position makes sense. But it checks out from an even broader perspective. When or if I personally ever buy into wearables, I'm not so sure I want it to provide much of the same function that exists in a product I already own.

But that doesn't really explain the price, does it? It's clear that much of the cost here has been front loaded into the watch's appearance. A swiss made stainless steel frame and watch face, leather straps crafted by one of France's leading historic tanneries, and one of the most expensive types of glass are all present.

Most of that is to better ensure that the product is attractive to people, that it's seen first as a quality watch first and a piece of wearable tech second. After some brief time with the Activité, it's clear that Withings has already achieved that.

Is the inarguably pricey Activité going to be what it takes to throw wearables into the mainstream? Withings is certainly on the right track as far as form is concerned, but not necessarily at that price. Stay tuned for our full review later this year.