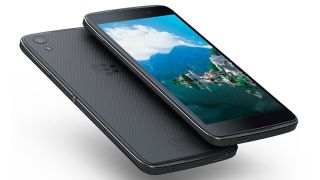 BlackBerry has a brand new smartphone, which may come as a bit of a surprise as the Canadian firm continues to struggle in the choppy hardware waters, and the BlackBerry DTEK50 harnesses a more traditional approach in an attempt to steady the ship while claiming to be the world's most secure Android smartphone.

BlackBerry has added its own privacy and security features from BB 10 and BES 10 to Google's offering already built into Android to make the platform even more secure.

This gives users of the DTEK50 secure voice calls, text messages and file sharing capabilities, while the DTEK app allows you to control and monitor security and privacy on the handset.

These aren't flagship specs then, but there should be enough grunt under the hood to make light work of Android on-screen.

Rather than replacing the BlackBerry Priv, which also featured a slide out physical keyboard, the DTEK50 slides in below at what we expect to be a lower price point. There's no physical board to speak of, but you do get BlackBerry's own on-screen offering, although you can download alternatives from the Play Store should you wish to use something different.

Without a physical keyboard the DTEK50 sports a more socially acceptable design compared to the odd-ball Passport and sliding Priv. It's not exactly premium metal and glass, but the sturdy polycarbonate body should sit nicely in the hand – at least, that's what we hope from ogling the official images.

BlackBerry promises a "very reasonable price point" for the DTEK50, which translates to a $299, £275 (around AU$400) tag. It's currently available to pre-order from the BlackBerry website with the DTEK50 release date set for August 8.

Check out our BlackBerry DTEK50 hands on video!