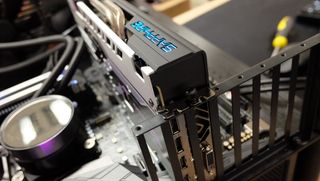 The AMD Radeon RX 5700 XT and RX 5700 are budget all-stars that really stand out in the mid range, but it looks like Team Red may be getting ready to drop a Navi 14 graphics processor (GPU) into the entry-level bracket.

We've just seen a leak that suggests a Navi 14 GPU will be replacing the AMD Radeon RX 570 – one of the best budget graphics cards on the market right now. This all comes via leaker Komachi, who called out the leaked AMD graphics card on Twitter.

This tweet links to a Compubench result of a mysterious AMD 7340:CF GPU, and it's apparently equipped with 3.2GB of VRAM and 12 compute units – though that would really be 24, as each compute unit in Navi is dual-core. This means that it's definitely not going to be going head to head with any super powerful graphics cards out there, but it should be perfect for the entry-level market, where people are still playing games at 1080p.

When we take the performance in this leak, and compare it to the current AMD Radeon RX 570, this leaked GPU seems to trade blows.  In the Level Set Segmentation – 128 test, the AMD 7340:CF GPU scores 4,591.506 mVoxels/s compared to the 4,610.882 that the Radeon RX 570 achieves. However in the more complex – 256 Level Set Segmentation test, the leaked graphics card manages to beat the RX 570.  We don't run any of these benchmarks in our own graphics card testing, so you should also take these Radeon RX 570 results with a grain of salt.

Now, keep in mind that this leaked AMD 7340:CF GPU might not even be real, so you should definitely take these performance numbers, and even the specs, with a giant grain of salt. Plus, because these are purely computation benchmarks, the results in games could be drastically different.

Where does it all fall?

We don't know how much stock anyone should really put in this leak. We do think that AMD will be replacing the RX 570 at some point, but the idea of Team Red putting out a graphics card with 3GB of RAM in 2019 seems hard to believe.

For instance, the AMD Radeon RX 570, a card that costs as little as $129 (£133, AU$209), comes equipped with at least 4GB of VRAM, and goes up to 8GB. We don't think we'll see many graphics cards coming out with less than 4GB, and that automatically makes us skeptical of these specs.

We obviously won't know if this graphics card is real until AMD comes out with an announcement, but right now, based on these leaks, we remain skeptical. However, there are definitely going to be more Navi graphics cards coming out over the next year, so we'll just have to wait and see.