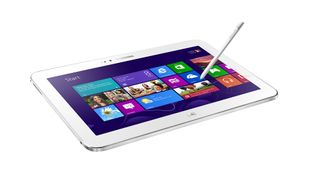 The world's thinnest - sort of

The Samsung Ativ Tab 3 is being billed as "a tablet with the power of a PC", and while that point is up for debate one thing is for sure, this is one slender piece of tech.

Backing up its claim of offering PC power the Samsung Ativ Tab 3 comes sporting an Intel Atom processor and 2GB of RAM - which aren't exactly stellar computing specs these days - as well as 64GB of internal storage.

You get the full blown version of Windows 8 on the Ativ Tab 3 - no cut-down Windows RT business here - and it comes pre-loaded with Office Home and Student, which could well make it an attractive option for enterprise customers.

It's 10.1-inch, 1366 x 768 display doesn't match the super high-res offering on the Samsung Ativ Q, although we hope we can get near to the 10 hours of quoted battery life - look out for our Samsung Ativ Tab 3 review in the future to see how it fares in that department.

Design wise Samsung says it's based the Ativ Tab 3 on its Galaxy smartphone series, while it's also equipped the tablet with its S Pen stylus which adorns the firm's range of Note devices.

There's no word on the Samsung Ativ Tab 3 release date or price, but Samsung has confirmed it will be in the UK later in 2013 - and we're chasing for details on other regions.