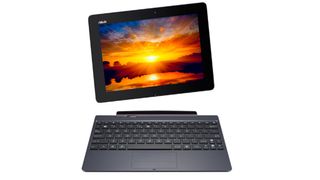 Among Asus's slew of products today came the "new" Transformer Pad Infinity, which has been updated with some pretty huge improvements.

That gives the new Transformer Pad Infinity screen a 299ppi density - which comfortably beats the iPad 4 and its 264ppi display.

As for your storage options, you've got 32GB of internal and an SD slot in the dock, which itself has an extra battery for giving the tablet a boost when needed.

We're not exactly fans of using a tablet as a camera, but if you like annoying others by holding up a large slab to take a sub-standard image then the new Pad Infinity has you covered with a 5MP rear camera and 1.2MP front snapper.

In terms of a release date, a representative told TechRadar to expect this to appear in Q3 this year, but nothing is set on price just yet although rumours suggest it may arrive for around $399 (around £260, AU$415), or $499 (around £330, AU$515) with the QWERTY keyboard dock.