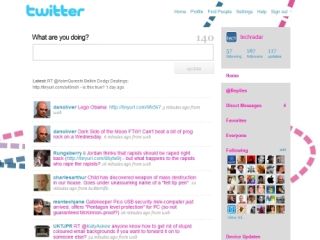 If you despaired when your mum learned to send SMSes and you dumped Facebook for Twitter when your father joined, then we've got bad news for you. The combined might of the Daily Mail and This Morning mean it's just a matter of time before you're receiving tweets from your mum and DMs from your dad.

On Tuesday, Phillip Schofield (@schofe) told the This Morning massive about the joys of Twitter. He also encouraged his audience to get online and send him tweets. In recent weeks the

and other newspapers have been banging on about Twitter, too.

The papers were mainly doing it to pick on Jonathan Ross (@wossy), but whatever the intention was initially, the effect has been dramatic: suddenly Twitter has gone mainstream.

According to HitWise, UK Twitter traffic has increased tenfold in the past year - and that's before This Morning viewers start joining. This time last year, Twitter was Britain's 2,953rd most popular website. Now, it's at 291 and rising fast. In fact, it's even more popular than the figures suggest, because they only cover Twitter.com traffic. Add in the number of people using Tweetdeck, Twitterific, Tweetie, Twadget and other Twitter-based services, and it becomes clear that something very big is happening.

So, why the sudden interest? Part of it is undoubtedly the presence of celebrities. Celebs rarely, if ever, become Facebook friends with people they don't know, but on Twitter anybody can contact their favourite personality - and many do. If you thought there was already too much sucking up to @stephenfry, @johncleese and @alancarr; well, you ain't seen nothing yet.

We suspect another big factor is that after a while, social networking gets boring. Once you've added everybody you've ever met and fended off their inane "what is your favourite colour?" application requests, it all becomes rather tedious.

Sign up with Twitter, though, and it's fun all over again. You can follow people you're actually interested in, and - for a while at least - you won't have to deal with all those idiots you really wish you hadn't accepted as Facebook friends.

The problem, of course, is that all the Facebook friends you're currently avoiding will track you down on Twitter - so what then?

The answer, if you think about it, is obvious. When they've all dumped Facebook and started Twittering, we'll sneak back into Facebook again. Enjoy your tweets, suckers!