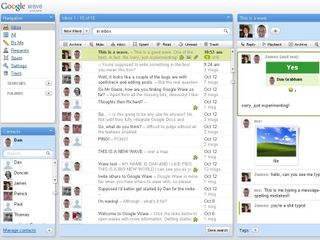 Google Wave is only in a Preview version at the moment

We've spent seven days using Google's new great hope for online communication – Google Wave. But even after a couple of days attempting to use it, one question was prominent in our mind – what exactly is Google Wave for?

Now, it's important to note that the 100,000 or so people currently on the service are only using a mere 'Preview' version, while there are numerous bugs and limited functionality.

Regular humorous error messages appear (some signed from Dr. Wave) and certain buttons don't work. Certainly for those initial days the experience was average at best. Not least because there was basically nothing to do.

But then – and suddenly – things got a whole lot better. To collaborate, you need people. And now around 10 of TechRadar's greatest friends have appeared on the service now (you get eight invites in the preview). Then, we were actually leaving messages for each other, albeit critiquing Wave and its potential.

And to answer the taxing question that everybody has been asking – "what is Wave for?" – we actually went back and read the first thing we ever wrote about Google Wave here on TechRadar.

Lars Rasmussen, the Software Engineering Manager in charge of the Wave project and one of the brains behind Google Maps talked about Wave's basic premise in a conference call with TechRadar in May 2009.

At the time he explained that "a Wave is a single shared space where two or more users can exchange real time dialogue, photos, videos, maps and documents in what we call a Wave. Everyone can reply to a Wave, people can come and go and you can drag and drop information from all over the web." All Waves appear in an email-style Inbox list.

It's a collaboration tool for all, then. But an even more essential thing to note is that Google is thinking as Wave in terms of a platform – that was clear from our recent interview with Google's Communications Manager Anthony House: "The goal is to create new platforms and to see whether new platforms will flourish or not rather than just building a product."

Certainly Twitter is a great example of such a service – the website has become relatively inconsequential to the process of tweeting and keeping up with those you follow. Google will make APIs available for anybody that wants to develop for the platform.

Also key to Wave's success is the advancement of the number of plug-ins. Google says the service is designed to "communicate and collaborate in real time". At the moment though that's hardly possible – only a handful of plug-ins are currently available. You can put a "yes, no, maybe" poll into your Wave, a Map and a TripAdvisor app.

Certainly you can't drag and drop or import files images in the way that you will be able to – see our earlier pre-release pictures - though you can attach a picture to a particular post in a Wave (see below).

The main thing that's required quickest is the ability to integrate with other Google services. To all intents and purposes, the contacts bit of Wave doesn't integrate properly with your usual Google Contacts, while there's no current integration with Gmail, Docs or Calendar. You can "ping" your contacts, though.

One of the most lacking things for us is that there's no presence indicator to see when others are online. Apparently there was though, but it didn't work properly, so we're expecting this to reappear sharpish. If you get an error message within Wave, it currently looks like this:

Aside from the times when you get an error message, the code behind Google Wave works very well. According to Google, Wave "is an HTML 5 application built with the Google Web Toolkit."