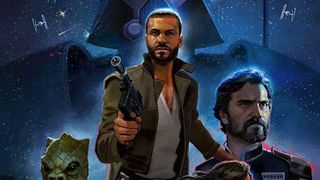 Disney is continuing the Star Wars hype in the run up to The Force Awakens by announcing a new game exclusively for mobile phones.

Set after the events of Return of the Jedi, Star Wars: Uprising is produced by Kabam RPG and will see mobile players take control of their own characters on either Android or iOS devices.

You design your own character - anything from a bounty hunter to a diplomat - and take them through online missions set within the Anoat Sector. That's where the popular Empire Strikes Back locations Hoth and Cloud City reside.

In a pocket-sized galaxy...

As you work through the missions you'll unlock more planets, gear and members of your team - we assume that means there's even more of the universe to explore.

If you're interested you can sign up for the beta from the games official site and it'll be launching in the coming weeks.

For the full release we've got to wait until Spring, and it currently isn't clear whether it'll be a free-to-play title with micro payments, or something more.