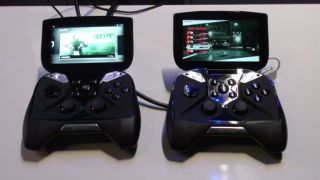 There have been inklings about a Nvidia Shield 2 here and there but it's been pretty quiet on the Shield 2 front lately.

However, as if right on cue before E3, an FCC filing has popped up with images of a Shield-like gaming controller called the "P2570."

The product description only lists it as a "wireless controller" so it's still up in the air as to whether this really is a Shield 2 device, but it's about time for a refresh, so anything's possible.

We recently spoke with Nvidia during Make Faire where Product Manager Jesse Clayton explained how the new Jetson TK1 - a logic board targeted for use in computer vision and robotics - has even more processing power than the one found in the current Nvidia Shield.

Nvidia hasn't been vocal about revealing new products for the Los Angeles expo next week, but it wouldn't be the first time a company had an ace up its sleeve. New Shield or not though, we'll still be at Nvidia's event sniffing around for Shield 2 news.