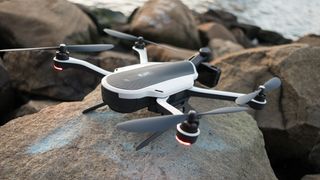 UK authorities are planning to introduce a drone registration scheme to improve the safety of its skies, with drone owners also having to take part in a safety awareness course before they can start piloting their unmanned aerial vehicles.

The new rules are going to apply to drones weighing more than 250g, so pretty much every model except the very small mini ones are going to count. The move comes after several near misses between hobby drones and real, people-carrying aircraft.

According to research, drones weighing more than 400g can seriously damage helicopter windscreens, while those weighing 2kg or more can make a dent in passenger jets at high speeds. Of course, even if there isn't a collision, drones are still a dangerous distraction for professional pilots.

Not yet ready for take-off

The UK government says 22 incidents involving commercial airliners and drones were investigated between January and April of this year, with police unable to trace the owners of the drones - one of the reasons for the new legislation. Drones also need to be registered in the US, though the law was recently challenged in court.

"Our measures prioritise protecting the public while maximizing the full potential of drones," said the UK aviation minister, Lord Callanan. "Increasingly, drones are proving vital for inspecting transport infrastructure for repair or aiding police and fire services in search and rescue operations, even helping to save lives."

This is still a way off though, with no specific date set - first, the government will need to explore the possible arrangements for the new rules. In the meantime, here's how to safely and legally fly a drone. Further rules are available from the Civil Aviation Authority in the UK and the Federal Aviation Administration in the US.