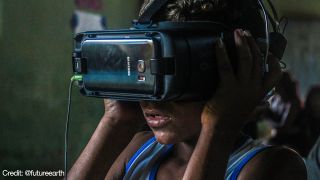 In a dusty, brightly-lit street in a favela named Gereba outside of Fortaleza, Brazil, a woman turns to you.

"My name is Maria de Lourdes de Sousa," she says. "I raised eight children without a home, food, clothes and shoes. People always asked me to give my children away, but I never did."

This is Voices of the Favela, a VR experience that combines 360-degree documentary footage with a Google Streetview-like interface. It lets you walk the streets of Gereba yourself and meet the inhabitants, moving from location to location and hearing the stories of the people who live there.

It's just the latest in a long line of similar projects, from 2015's UN-funded Clouds over Sidra which documents conditions in a camp on the Syrian border to the New York Times Magazine's The Displaced, which combines text, photographs and VR to tell the story of the 60 million refugees around the world, or Sky News' Calais: The Jungle, which takes viewers into the heart of the migrant camp.

All of them have the same goal in common - to evoke empathy for those depicted - showing the world that they're real people, not just distant statistics. Why VR? Because, the creators believe, it's the most effective way of doing that. The "ultimate empathy machine", as Clouds over Sidra director Chris Milk puts it.

"Most people seem to remember the VR-experience as 'having been there', which is very different from 'having heard about something'," says Marcus Olsson from SceneThere, the company behind Voices of the Favela. "It's more real than virtual, really. This can be used to change people's perspectives."

That's evident in the response to Clouds over Sidra. After UN Secretary General Ban Ki-Moon insisted that it be screened during the Third International Humanitarian Appeal for Syria in Kuwait in March 2015, the fundraising event secured donations of 3.8 billion US dollars - a billion more than expected, and substantially more than the sums raised at similar events in previous years.

It works at special fundraising events, where it could be argued that people are in a mood to donate anyway, but it also works in the street. UNICEF's Patrick Rose told Fast Company in December 2015 that their fundraising volunteers had been using the Google Cardboard and Samsung Gear headsets to play Clouds over Sidra to people. The results? One out of every six people who saw it donated - twice the normal number. Many made monthly commitments.

Similar effects have been found in the lab. In 2014, Portuguese researchers compared the emotional response of volunteers viewing an image in a virtual reality environment to those viewing it on a computer screen.

"The use of VR seems to have a considerable arousal increasing effect," they wrote, "which might imply that the level of attention could be much higher when using VR methodologies."

Dutch scientists found the same thing in 2009 when they compared the emotional response of audiences watching a 3D movie with those watching it in virtual reality.

"Results showed that stronger immersion led to more intense emotions," they wrote in the paper describing their experiment. "Highly immersive cinema has its impact on a basic dimension of emotion."

Of mice and men and bigots

But while VR is clearly a step up from seeing something on a traditional screen, experiments on mice indicate that our brains still treat it as something different to actual reality - at least in terms of how individual neurons respond.

Mayank Mehta, a professor of physics, neurology and neurobiology at UCLA, performed experiments on mice running on a treadmill with tiny VR glasses and monitored their neural activity.

"The neural pattern in virtual reality is substantially different from the activity pattern in the real world,” he said. "Since so many people are using virtual reality, it is important to understand why there are such big differences.”

If these effects hold as more people experience virtual reality, the technology could be a vital tool for bettering the world. While it may feel implausible that you'll be able to plop a VR helmet on your racist uncle and see his bigotry dissolve in real-time, the power that virtual worlds hold for tackling prejudice has been documented again and again.

At the University of Barcelona in 2013, a research team gave participants a racial bias test before and after immersing them in a virtual reality experience where some inhabited a body of a different race. Only those who had been immersed in a dark-skinned body showed a subsequent decrease in racial bias.

At Stanford University in 2006, a similar experiment was conducted where participants were placed into avatars of both young and old people. Among those who were put into the body of an older person, negative stereotyping of the elderly was significantly reduced.

"It was extremely encouraging to find that such a short virtual interaction can change a person’s negative stereotypes," the researchers wrote. "This intervention in immersive virtual reality can have a positive effect on reducing negative stereotypes."

Seeing the world through the eyes of another

Then there's The Machine to be Another, an art project that asks "what would the world be like if one could see through the eyes of another?". In it, two people - a "user" and a "performer" - are placed in identical environments.

The user wears a VR helmet that displays a video feed from a head-mounted camera on the performer, who mimics the user's movements as closely as possible. The user can then see out of the performer's eyes and explore their environment (which usually includes mirrors and items with emotional resonance to the performer), while listening to their thoughts through a set of headphones. The experience, according to those who've tried it, is incredibly intimate - like being inside someone else's head.

"There is no question that it has that power," he said. "It creates empathy in a way that no other medium can. You can now put the viewer into a place where they are someone else, they are standing in their shoes and having their experiences. It is very effective in communicating 'this is what it’s like to be me' or 'this is the effect that an issue is having on others'."

But there are barriers still.

"At this point, the biggest is distribution of the devices," says Trickett, whose company makes low-cost VR headsets that you can slot your iOS or Android phone into. "While there is a lot of excitement about VR, there still isn’t much penetration of the required technology. That is going to get solved soon."

Then there's the difficulty of persuading people that seeing through the eyes of another is something that they actually want to do. The best way to overcome that is probably by creating really compelling virtual reality experiences that people want to share, but despite the plaudits heaped on Clouds over Sidra, that field is still in its infancy. The Silent Spring or Cathy Come Home of virtual reality is still some way off.

Nonetheless, progress is being made, and Voices of the Favela's choose-your-own-adventure navigation system is a tangible step forward, if only a small one.

"The easy navigation together with the linear story told by audio interviews seems to hit the sweetspot of linear versus non-linear narration," says Olsson. "The navigation makes people feel free to move around and keeps people longer in the experience, and the linear story guides people and helps them find a focus in what they see."

Emblematic Group, which is building virtual worlds as opposed to shooting 360 video, has also been making strides. Led by Nonny de la Peña, who was once described as the "godmother of virtual reality", the company has collaborated with the New York Times, Google, the Associated Press and Al Jazeera to build journalistic experiences in virtual reality.

Their project 'Use of Force' examines border patrol violence and the dehumanisation of migrants. 'Hunger' examines over-strained inner-city food distribution systems. 'Kiya' deals with domestic violence, while 'One Dark Night' tells the story of the killing of Trayvon Martin. "Emblematic has been a pioneer in this immersive journalism," says Trickett.

"I've really been compelled to try to make stories that can make a difference and maybe inspire people to care," de la Peña said in a 2015 TEDWomen talk.

"I've worked in print. I've worked in documentary. I've worked in broadcast. But it really wasn't until I got involved with virtual reality that I started seeing these really intense, authentic reactions from people that really blew my mind."

With nationalism and bigotry rising once again around the world, the time is right for new ways to break down people's prejudices. An effective, affordable 'ultimate empathy machine' could genuinely change the world.

Virtual reality still has serious hurdles to jump before it can take on that role, but the early signs are good. The only question is whether its promise can be delivered before it's too late.