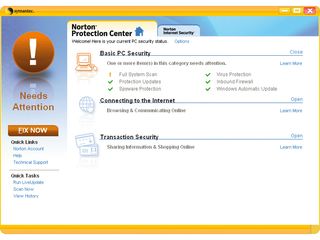 Internet security suites have increasingly focused on phishing over other threats

It's been a whole decade since the first occurence of what was to become known as phishing, the practice of getting people to reveal banking and other details online with a view to committing fraud. It's now such a common threat that it's more of a focus for internet security firms these days than the virus.

Phishing is now such a problem that there are now an estimated 6.1 billion attacks per day according to security expert RSA . The company also says that, according to a recent survey it conducted, 83 per cent of people no longer trust their banks as a result.

The survey, which took in 1,678 adults from eight countries around the world, discovered that trust in sites is on the decrease - 82 per cent of account holders are less likely to respond to an email from their bank, for example.

These figures are up considerably, says RSA, from similar surveys in 2004 and 2005 when the numbers were 70 and 79 per cent respectively. Most of these - more than half of respondents, said they were more unlikely to sign up to services online. 44 per cent said they were also increasingly concerned about other online threats such as Trojans and keyloggers - programs that can install themselves on your PC and steal your personal details.

More worrying for the banking community is that 83 per cent of respondents said they no longer trust their banks, while 69 per cent believe financial institutions should implement stronger authentication for online banking.