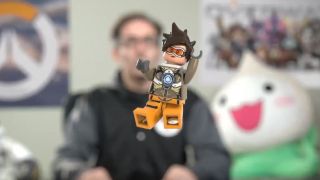 Blizzard has finally given us our first look at the Overwatch Lego collection.

The collection was teased via a 30 second trailer on Twitter, which shows Blizzard vice president/Overwatch game director Jeff Kaplan playing with a Tracer Lego character which suddenly comes to life.

Blizzard announced the Overwatch Lego collection back in May, however the company has remained pretty tight-lipped about it since then. However, in August, Lego teased six characters in a tweet (which look like McCree, Genji, Widowmaker, Reaper, Soldier 76 and Mercy).

We still don't know when we'll get to play with these tiny heroes as the official Overwatch Lego page just says 'coming soon' with an image of some peanut butter and bananas - so we know we'll be seeing a Winston figure.  Now we've seen teasers for Tracer and Winston, alongside the original Lego teaser, it seems we'll be getting figures of all the current heroes.