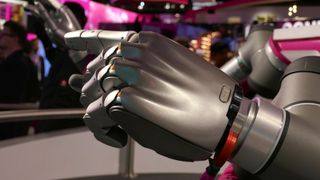 Governments and businesses across the Middle East are beginning to realise the shift towards AI in a bid to become operationally efficient, create a new customer experience and create new revenue streams, apart from the benefits it brings to the economy.

“AI is a technology we have to look at it seriously because it will impact every single facade of life. When people were talking about the negative impacts of AI, His Highness Sheikh Mohammed bin Rashid Al Maktoum, Vice-President and Prime Minister of the UAE and Ruler of Dubai, proved to the world that we don’t fear the unknown and wants to work with the unknown.

“Yes, there will be issues to be dealt with but we need to start to deal with it today.  When the world talked about the controversial features of AI, Shiekh Mohammed acknowledged that AI is going to be a technology that is going to impact every single government,” he said.

According to consultancy firm PwC Middle East, the AI could contribute $320b to the Middle East economy by 2030. Out of the $320b, Saudi Arabia’s contribution could be $135.2b and UAE with $96b.

In the UAE, Al Olama said that AI is at the forefront of the UAE government’s strategic plans and Dubai is leading the way within the country.

“By adding AI to every single sector, you will find a successful model and that is going to change the world,” he said.

The biggest opportunity for AI in the Middle East and Africa region is in the financial sector where it is estimated that 25% of all AI investment in the region predicted for 2021, or $28.3 million, will be spent on developing AI solutions, followed by the public services, including education and healthcare, and the manufacturing sector.

In the UAE, the use cases of AI are in utilities, banks, fraud analysis, automated threat intelligence, Dubai Department of Economic Development, land department, transportation and public sectors.

Moreover, there are some interesting pilots taking place in the healthcare sector.

“It is helping us make better decisions – and doing it faster, better, more cheaply and more accurately. It can sense, think and act. To deploy AI, we need to learn and understand what AI is first, identify the use cases and where you are going to put it,” he said.

However, he said that AI is a term that is often confused with others such as robotic process automation (RPA) and business intelligence.

“AI can be used for automation but automation does not imply AI.  Enterprises are realising the value from digitisation to AI along two distinct but related paths, to enhance productivity, increase profits and enhance the experience,” he said.

“AI can do many different things and it is a solution but we need to understand the problem. AI may not be the answer for all, sometimes it could be RPA or rules-based. Significant and strategic investments in AI will catalyse major scientific, technological, societal and economic progress,” he said.

Throughout history, James Dening, vice-president and digital worker evangelist at Automation Anywhere, said that technology has been used to augment people, much more than to replace people.

According to research firm Gartner, AI will create 2.3 million jobs in 2020, while eliminating only 1.8 million jobs.

“Put both together and that will be the future of work.  We have more of technology and more of pieces of hardware and software and that are creating more data. As a business leader, one of the problems is how to make sense of that data.  How do you take the data and use it to make decisions? Among the data, we have structured and unstructured data while the majority is unstructured data. To make sense of unstructured data, that is where AI comes in,” he said.

Gartner estimates that 40% of large enterprises will have deployed RPA software by the end of next year, up from less than 10% today.