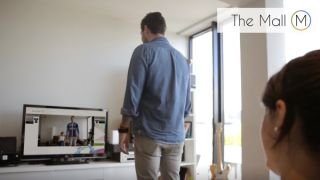 The Mall on Xbox One

If you see more teenagers hanging out in your living room than normal, blame a new app on Xbox One called The Mall.

The app allows anyone to virtually shop for clothes using your home console with a nifty feature called "the dressing room" that uses Kinect to virtually overlay clothing on you so you can see how it'd (sort of) look in real life.

The app, produced by Dublin-based television e-commerce company Von Bismark, is free, though, obviously any clothes you might purchase will cost real-world dollars or euros and be processed through PowerTag. Brands that have signed up for the experiment in shopping so far include SoccerPro, Style PB, Grayers and Go2Games, with more to come sooner rather than later.

Before you get your shopping on you'll need to create an account first (a relatively arduous task on Xbox), but it shouldn't be much trouble past that.

If the idea of turning your living room into a personal fitting room really isn't your scene, well, you can always check out one of Xbox One's other quirky apps like the Dominos app that gives you the power to order a pizza without using a telephone, learn a new language through Rosetta Stone or watch a wrestling match on the WWE Network. (It's a pretty weird system, to be honest.)