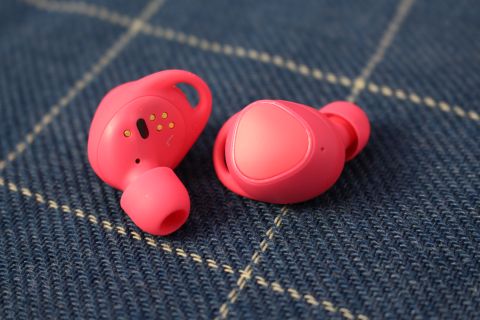 While the Gear IconX 2018 brings better battery life than its predecessor, it still has problems that prevent it from being a truly outstanding audio product.

The original Samsung Gear IconX was criticized for having less than stellar battery life, despite being a fairly decent first attempt by Samsung. Samsung later unveiled the updated Gear IconX, boasting an improved battery life and better integration with your phone.

We finally got our hands on a review unit (in neon pink, no less) to see if Samsung really was getting serious about competing in this space. It's already crowded thanks to products such as Apple AirPods, Sony WF-1000X and Beoplay E8, so it's interesting to see what Samsung is doing differently this time around.

Design-wise, not much has changed from the original IconX. You get three colors to choose from – black, grey, or pink, and they come in a pill-shaped carry case that also doubles as a charger for the earphones when you’re out and about. The earphones fit snugly into the case, but there’s no magnetic support to keep them secure. So if you accidentally drop the case (like we did several times), then it will most likely snap open, and your precious earphones will come tumbling out.

At the front of the case are two LEDs which will change from red to green when your earphones have been fully charged. At the back there’s a USB-C port for charging the case, as well as a small button that turns on Bluetooth pairing. Yes, you’ll need to have the case with you to pair these earphones with a device, which is bizarre. The case is a bit bulky to jam into your pocket if you want to keep your earphones charged on the go, but is fine to throw into a backpack or handbag.

Included in the box are a number of ear tips and wings, which will help you get the most comfortable fit when placing the earphones in your ears. The heart rate monitor has been axed from the new IconX, which is probably for the best as it wasn’t the most accurate. The IconX will still measure distance and speed when you’re walking or running by using the built-in accelerometer, but that’s about it.

What we absolutely do love about the IconX is the ability to transfer music directly to the device, which means you can grab these for a run and leave your phone at home so you don’t get disturbed. There’s 4GB of onboard storage to play around with, and you can transfer music for a PC or Mac, or wirelessly through Bluetooth. Or if you’ve got a Samsung phone, you can directly plug the IconX  into it using the supplied cable.

There’s also an Auto Tracking mode that automatically starts tracking your activity once you’ve been walking or running for more than ten minutes. Personally, we just prefer to tell it when we’re working out rather than leaving it to chance.

To pair the IconX with your smartphone, you simply open the case and the device will be ready for pairing. The IconX offers Android users more features than when paired with an iOS device, and as expected you’ll get the best usage from pairing it with a Samsung phone.

When pairing to an Android phone, you’ll be prompted to install the Samsung Gear app to manage the earphones, as well as Samsung Health to monitor your fitness goals. However, with an iOS device, you have a much more limited set of functions which is a bit of a disappointment. Even though there’s a Samsung Health app for iOS, it’s not currently compatible with the IconX.

Once paired, you can control your audio with a series of gestures on the IconX. Tap to play or pause a track, double tap to skip a song, or swipe up or down to adjust the volume. While the tap controls worked fine, the volume control was almost impossible to pull off. No matter how slowly or quickly we swiped, we just couldn’t manage to adjust the volume, and ended up unintentionally pausing the audio instead.

While the IconX are certainly clear enough for listening to music, we found that the overall quality of the audio was still a little underwhelming for our tastes. There’s no way to tweak the audio in any way, so you’ll have to live with whatever the IconX can deliver, which is strictly acceptable quality.

Music sounds clear, but it lacks a particular feeling of depth, which we think could have easily been accomplished if we had some sort of equalizer to play with. Bass is entirely dependent on how the earphones are placed in your ear – if they’re pointing directly towards your ear canal, you’ll get a deeper sound. If they’re placed even at a slight angle, you’ll lose out on any decent bass levels.

There’s an ‘Ambient Sound’ mode, which turns on the microphones so that you can hear your surroundings in addition to your music. This is a handy feature for sure, but activating it involves digging into the app to enable it, or holding down either earphone for around eight seconds.

After trying this once, we found it far more efficient to just yank the earphones out of our ears when we needed to hear what someone was saying. The Beoplay E8 for example, makes things easier with just a tap on the left earphone – something that Samsung could have similarly adopted in the IconX.

For the fitness buffs, the IconX will resist sweat or moisture, so they’re a great gym companion. As mentioned before, you can load your favorite music directly onto the IconX so you can get a distraction-free workout. You can turn on the onboard coach to guide you through some basic or intermediate running programs, but the voice output of the coach is cringeworthy at times.

Using the IconX during phone calls was pretty good, with calls coming in quite clearly and callers having no problem at all hearing us. What was a bit of a miss was voice recognition when trying to speak to Google Assistant or Bigsby. Some phrases were misunderstood or just not detected, and we found we had to raise our voices a few levels louder than normal just to be heard correctly.

Lastly, the IconX is not something you want to wear for more than an hour or two. They exert a slight yet noticeable pressure on your ears, and after prolonged use we had to take them out. There are also some unfortunate connectivity issues due to Bluetooth’s’ limitations – occasionally the left earphone would suddenly drop out and back in again, which made for a rather disappointing listening experience.

Battery life was the biggest complaint of the original IconX, and thankfully this has been addressed – to some extent. Samsung claims you can get around five hours of playback on a full charge, and we clocked a little over four hours of playback in our tests.

The carry case can provide another full charge, or up to an hour of playback in just ten minutes of charging. For all-day use these aren’t the ones for you, but for short commutes or a couple of gym sessions, they’ll hold out just fine. What’s annoying is that the earphones don’t have an off switch, so at times even after we had taken them out of our ears, they remained on and continued to drain their batteries until we put them back in the case.

The Samsung Gear IconX 2018 is an improvement on battery life compared to what Samsung had launched previously, but still leaves a couple of things that need to be checked out properly. There’s the overly-sensitive touch controls, the overly snug fit, and the inability to turn them on or off without carrying around that case. There’s not much love for iOS users either, so overall these aren’t the most competent wireless earphones that your money can buy.