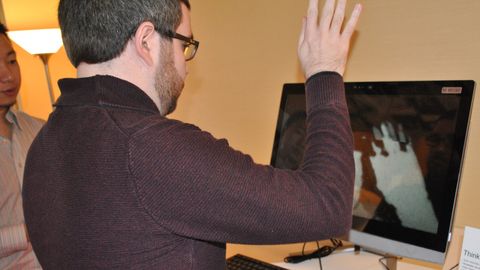 Earlier this year, HP unveiled Sprout ($1,899, £1,176 or AU$2,135), a double touchscreen all-in-one PC designed for visual artists, videographers, designers and photographers. Sprout features a 23-inch LCD touchsceen monitor, a built-in projector that hangs over the monitor onto a 20-inch touchpad mat that can project inanimate objects onto the desktop for printing and graphical manipulation.

Like these machines, the B50 is designed to provide users with a more realistic way to interact with content on-screen. Lenovo bills the B50 as a multimedia machine that can recognize gestures and expressions in order to enhance video chats, 3D editing and gaming.

Unfortunately, the images produced by the camera aren't replicated perfectly, especially when motion is involved. For example: nearly all real-time images were surrounded by distortions (think of the T-1000 after a bullet has grazed his body parts).

Perhaps even more annoying: gestures and motion aren't replicated quickly enough. My colleague Joe Osborne played what should have been a fun soccer game in which his hand gestures were supposed to mimic a goalie's. Unfortunately, whenever he went to deflect a shot it took a few milliseconds for the machine to register his movements, which caused him to get scored on more times than Brazil in the 2014 World Cup semi-final.

Lenovo says the tool can be helpful in demonstrating and presenting complex tools and PowerPoints via video chat. This may be true, but if you're thinking of buying the machine for games, I'd recommend you wait a few years for the technology to catch up to the inspiration.

The B50 is a solid machine. It runs smoothly, it stores a ton of data, and it has a pretty design. Unfortunately, it's billed as a desktop that, when combined with a 3D Camera, can provide interactive multimedia experiences. This just isn't the case. The 3D movements are so clunky and distorted you'll wind up wanting to smash the gorgeous full HD screen.