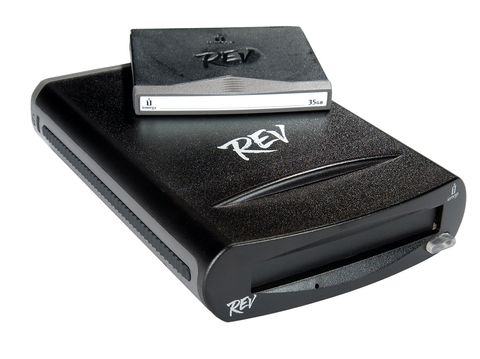 The next generation of Iomega's cartridge storage solution

Iomega made itself an industry-standard name with its Jaz and Zip drives. Like these groundbreaking devices, the more recent REV introduction is based on small, convenient cartridges that you can buy on an ad hoc basis, but utilises hard disk technology within each cartridge for fast data transfer.

Spoiling you for choice, The REV drive is available both as an external device, in either USB2 or SCSI flavours, and as an internally mounted drive, with SCSI, ATAPI or SATA interfaces. Iomega sent an external SCSI model as our review sample, although the USB2 version is a little smaller and cheaper. Build quality is robust and the finish is both stylish and neat, although the need for a separate power supply adds an element of clutter.

The 35GB cartridges for the REV are eminently portable, weighing in at 75g and measuring about 75x75mm and 8mm tall and they're not exactly cheap, costing about £35 each.

As with the HP StorageWorks DAT backup solution, compression plays a major role in Iomega's strategy with the REV, which is why cartridges are labelled as 35GB/90GB, with an asterisk after the second figure. However, the compression element of the supporting Iomega Automatic Backup Pro software works well, making automatic, scheduled backups a doddle.

One of the things that made the Zip drive such a success was its ubiquity, enabling people to send large files to each other using cheap cartridges. Broadband has stolen some of the REV's thunder, but it's still good for transporting space-hungry multimedia collections and making backups. While transfer speeds are slower than on hard drives, they're much faster than on tapes.