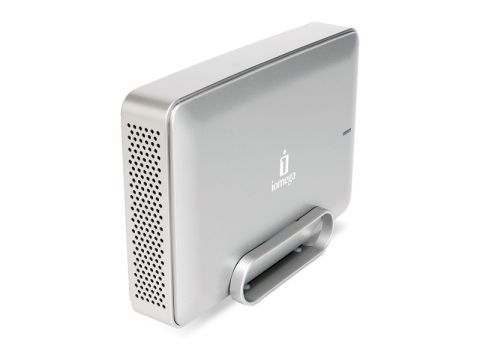 The eGo has a plastic casing, but is designed to look good next to Macs

The Desktop Mac Edition of Iomega's eGo can be laid flat or used in a vertical position, using the supplied stand. Its casing is plastic, but clearly styled to match the brushed aluminium finish of the iMac or the Mac Pro.

A grilled front makes it an especially good match for Apple's high-end desktop. As you'd expect, its 1TB drive is preformatted for use with Mac OS.

Connectivity is through FireWire or USB. There are two FireWire ports so you can daisy-chain another FW device, and although both are FW800 ports, there's a FW800-to-400 cable in the box.

You can also connect through USB 2.0, but unlike the Iomega MiniMax, the eGo Desktop doesn't give you an integrated USB hub.

The power button is set into the casing, and must be prodded pretty hard to switch on and off. This could be problematic if the drive is located somewhere awkward to reach.

In tests, the eGo recorded random read/write speeds of 12.0/15.5MB/s under USB, and 17.4/23.5MB/s via FireWire. So there's little to choose between it and the MiniMax, but overall, we prefer the latter.

There's nothing wrong with the eGo, but the MiniMax's extra USB ports give it the edge, unless you prefer a vertically oriented drive – in which case, you may regard Iomega's UltraMax range as kinder on the eyes.