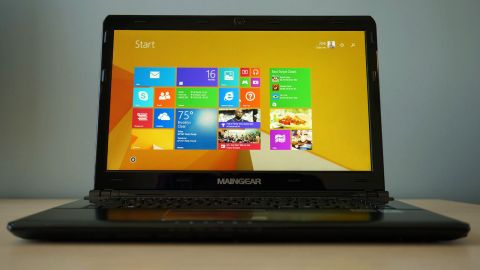 Value is one (quite important) thing, but there's no doubt that – with gaming machines – it all comes down to the frames per second. Of course, the Pulse 14 being a laptop, chances are you're going to do more on it than just play. Here's how it fared in more more general tasks, too:

As far as 3DMark and Cinebench's graphics test are concerned, this is about what I would expect from Nvidia's latest low-end mobile GPU. Surprisingly though, the Alienware 14 nearly bested the Pulse 14 on Fire Strike with 3,123 points, whereas the Gigabyte P34G came in much lower at 2,370 overclocked on last year's chip.

As for PCMark 8, it shouldn't be a surprise that this Maingear would gobble up just about any set of programs that you threw at it. My normal workload wasn't enough to make this laptop flinch, not that it should.

Of course, Metro: Last Light at its highest settings made the Pulse 14 chug, but I would expect playable frame rates at high to medium settings and 1080p. As for one of the latest shooters, Titanfall, I recorded a completely playable average frame rate of 43.8 fps through FRAPS after a 10 minute session. That result was recorded at 1080p with every detail setting notched at "high", along with 2x anti-aliasing and 16x anisotropic filtering enabled.

Save for perhaps The Witcher 3, a historically demanding game series, I'm confident that the GTX 850M will be able to handle the rest of 2014's major PC game releases at full resolution and OK settings. It's 2015 and beyond that's worrisome, considering not many folks have $1,400 to replace a gaming laptop every year.

Sure, the PCMark 8 battery test produced no surprises, but synthetic tests are always only half the story. In an age wherein I expect every gaming laptop to last about as long as it takes to type this very sentence, the Pulse 14 caught me off guard.

In my own testing, the notebook lasted a much more impressive 4 hours and 2 minutes. That was with the power setting locked at "Balanced", the screen brightness at 50%, with about 10 Google Chrome tabs open, TweetDeck and HipChat running, and the occasional HD YouTube video playing.

Considering the P34G lasted for just 2 hours and 33 minutes, I'll gladly take nearly half a work day with this machine. Of course, don't expect times anywhere near this long while gaming on the battery – you'll be lucky to eke out a full hour.

A sharp screen, but nothing special

For the price here, I would expect nothing less than a full HD screen with great viewing angles, and that's just what the Pulse 14 offers. Thanks to an Advanced Hyper Viewing Angle (AHVA), matte panel, you and two friends could huddle together to watch the latest Game of Thrones episode that you definitely did not pirate.

But beyond that, there's not much else to write home about here. Colors err on the blue end of the spectrum, which won't matter much when you're sprinting toward a giant weaponized robot, guns blazing. But it might when you're watching a movie or browsing the web.

Inputs: too far back to basics?

First things first: this is not an original frame design, so there wasn't much for Maingear to do about the keyboard and mouse to make them stand out. And, as far as inputs go, there isn't anything wrong with them. There's just nothing stand-out or marquee about them either.

The membrane keyboard offers deep travel and roomy spacing, but the keys' kickback could be a bit punchier for my liking. And the corners of each key are too sharp – a rounded edge would have been nice. Though to MSI's credit, there isn't much flex at all here. However, the fact that you're getting no backlighting here for the price is a major bummer.

The spun metal surface of the touchpad makes for a fun, accurate tracking experience, surrounded by classy, chamfered chrome edges. However, the tracking surface is on the small side, and the chrome clicker has a sizable dead space in its center. These are not the inputs you should expect for what amounts to a paycheck or more.

The only apps that Maingear offers are THX's TruStudio Pro, which enhances audio at the software level, and Killer Network Manager. This allows you to prioritize certain apps and games for bandwidth usage and monitor your adapter's performance. As for the former, I noticed some differences as I tweaked a few virtual dials, but nothing that improved upon already terribly tinny speakers.