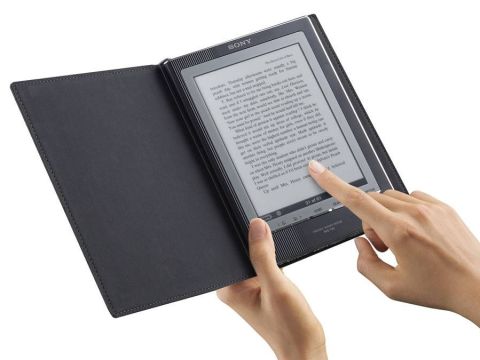 The Sony PRS-650 Reader Touch has been given a 6-inch screen with a 600 x 800 resolution. This is the same size as the original Sony Reader, but it's the build quality which has been improved dramatically.

An aluminium chassis replaces the dowdy plastic exterior of yore. This gives the Reader a nice weight – solid but far from too heavy. At 215g it won't give you arm and neck ache like the iPad does.

The chassis of the Sony Reader Touch is slim, too, at just 119 x 168 x 10mm, and Sony has made sure that every button on the device is flush to the bezel. This is a nice stylistic touch and one which means that you won't accidentally turn it on when it is in a bag.

As the Sony Reader does utilise touchscreen, the buttons on show are limited. On the front, just under the screen is a forward and back button for flipping pages and home, zoom and option buttons.

Situated on the bottom of the Sony Reader are a Micro USB port, volume control and 3.5mm jack.

Unfortunately Sony still seems intent of keeping the MemoryStick format alive. The slot may not take up much room on the top of the Reader Touch, but it does feel a little like overkill having both memory slots on board.

The only other noticeable feature on the Reader Touch is the stylus. Yes, the Sony Reader Touch comes with a stylus. This is a little strange considering how much the touchscreen has improved on the device, and is a feature which will become redundant in future renditions of the Reader Touch.

In our tests we hardly took the stylus out. Except to look at it to remind us what technology in 1999 looked like.